Sexiest Woman Alive. Whoever She Is.

There was a period of years in the last decade when I had an Esquire subscription. The primary reason was for the Chuck Klosterman columns that used to run in that magazine, which were enjoyable more often than they weren't, but I would read other parts of the issues as well. In 2004 they started bestowing the hypothetical honor of "the sexiest woman alive," which would feature a pictorial and interview with the feted one, and the photos (not surprisingly) would show the woman in a way that played up her sexuality. Not as much as Playboy would, in that there'd be specific spots on her body that could not be shown uncovered, but not entirely dissimilarly. 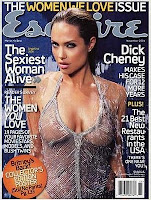 I'm sure it sold magazines. However, I think part of the appeal was not merely seeing a woman in a seductive pictorial—magazines like Maxim have those every issue, if one is looking for that. No, it was seeing the specific women, who tended to be reasonably popular celebrities.

The first one was a household name: Angelina Jolie. And it truly was a phenomenal cover photo they had for that one (see right).

The next year they anointed Jessica Biel. Uh, definite step down, but at least someone that had been on TV (and I've written about her previously, so she's on my radar at least peripherally).
Then Scarlett Johansson. Bit more famous.
Charlize Theron. Oscar-winner.
Halle Berry. Oscar-winner.
Kate Beckinsale. Well, she been in movies (I wrote about this last year).

Then some weeks ago I passed a newsstand—I had long since allowed my subscription to expire, as Klosterman's columns no longer appeared in it—and saw the latest issue. I knew it was the "sexiest woman alive" issue because the cover was nothing but that text in large letters with a woman imposed in front of it (see below left). And the thing was: I had no idea who the heck she was.

Even after picking it up and glancing through the pages of her pictorial and reading her name (which is apparently Minka Kelly) I had no idea who she was. Even after reading the introduction to the interview wherein her origin was briefly traced and seeing that she had apparently been on the show Friday Night Lights (which, like everyone else, I don't watch but I'm sure is very good), I had no idea who she was.

I'm not suggesting she lacked the physique of what one would expect of the world's sexiest woman, but it was difficult to think her as holding that title in any way, as sexiness (in my humble assessment) stems from attitude and personality, and having no idea what she was like outside of a few photos (unlike, say, all the previous holders of that honor) I had no option to place her in such a context.

Also, let's take a moment to compare that cover photo to the one of Jolie above. On that basis alone, how can she even be placed in the same category?

Of course the sexiest woman alive for me is my wife, but even to try to put myself in the shoes of another who was charged with declaring that some public figure should be considered thus I couldn't see this young woman in that role. Because, as I've beaten in to the ground, I didn't know who she was.

I'm not sure whether I'm completely losing touch with pop culture or if Esquire's just having a more difficult time finding women who are willing to be saddled with that title—either because it seems pretty arrogant, or because they only get to be sexiest for a year (as though they somehow lose their sexiness through the mere passage of 365 days).

It's possible that both could be the case. (Does the AARP magazine have a "sexiest woman still alive" issue? I fear a subscription to that may be forced on me at this rate.)

Both photos above are, of course, from Esquire. Just so nobody sues me.
posted at 8:45 PM
Email ThisBlogThis!Share to TwitterShare to FacebookShare to Pinterest
Labels: admitting too much, pop culture