The end of the year approaches, and as with everything else in life that holds significance only because we choose to impart some onto it; the calendar of the dominant economic and/or military powers over the last two millennia has its last day before the year changes coming in a few days and our proclivity is to consider that as some cosmic reset button having been pushed.

There are calendars that some observe that do not end upon December 31, but those aren't used by society in general so we won't bother with them; if one is not part of a community where those have significance they're merely an excuse for a celebration (if one is so inclined).

Well, okay, to be fair, New Year's Day is ultimately nothing more than an excuse for a celebration; it's not religious or cultural, but just a national holiday that corresponds with the changing of the calendar.

What does this say about us?

Read the rest of this uselessness >>
posted at 12:31 PM No comments:
Email ThisBlogThis!Share to TwitterShare to FacebookShare to Pinterest
Labels: holidays, sincerony

Now that Xmas is nearly a week past, can we admit something?

If the celebration with all the overblown decorations and songs about and general overindulgence that is associated with Xmas were instead directed toward a 16-year-old for her birthday, we'd pretty much consider her to have serious self-esteem issues and think her to be more insufferably spoiled than the Kardashians, "Real Housewives," and the entirety of reality TV personalities combined.

posted at 7:41 PM No comments:
Email ThisBlogThis!Share to TwitterShare to FacebookShare to Pinterest
Labels: admitting too much

"I saw mommy kissing Santa Claus--"
"And I saw daddy file for divorce..."

- Caroler with some unresolved issues

(You didn't notice the solstice nine minutes ago, did you?)
posted at 9:40 PM No comments:
Email ThisBlogThis!Share to TwitterShare to FacebookShare to Pinterest
Labels: seasons

A recent VW commercial for the Passat spotlights the stereo system by first showing people singing the wrong lyrics to the chorus of Elton John's "Rocket Man," then having the driver of the Passat be able to sing the accurate line due to clarity of the sound system in the car:

And although it doesn't inspire me to actually purchase said vehicle, I must admit I don't always fast-forward through it, because it did strike a chord (so to speak) with me; I, too, was for quite some time mis-hearing that line.

My particular take on the oft mistaken one: "Burning down the streets of heaven, now." (Hey, it seemed to make sense at the time. And at least had the first word correct.) And even after I figured out the correct line ("Burning out his fuse up here alone"), I still tended to hear my interpretation when the song played.

Read the rest of this uselessness >>
posted at 6:33 AM 1 comment:
Email ThisBlogThis!Share to TwitterShare to FacebookShare to Pinterest
Labels: music, TV

Hey! Watch as I make a sweeping generalization!

On the latest Culture Gabfest podcast they took on the topic of a Kurt Andersen Vanity Fair piece about how styles haven't changed in the last twenty years, which they all pretty well summarily dismissed. There were nuggets of worthwhile argumentation, they conceded, but they proceeded to pick apart all the things that had changed that he conveniently overlooked in the essay.

I can only conclude that such arguments, either consciously or unconsciously, are offered not to be persuasive but to spur reactions. It's not that there won't be those who already agree, but they were not swayed; the piece might be an effort by the author to find others who share his myopic opinion about the topic while at the same time hoping to elicit responses to some level of the contrary.

Read the rest of this uselessness >>
posted at 10:43 PM 2 comments:
Email ThisBlogThis!Share to TwitterShare to FacebookShare to Pinterest
Labels: rumination

Not the wedding photographer

Last month we attended the wedding of some friends—not ones we see very often these days, but ones where we were invited to a relatively small ceremony. And as someone who has a photo blog, you'd probably think I would have brought my trusty Canon S3 to capture the festivities.

You would be wrong about that.

As we were almost about to walk out the door I grabbed the small camera (that we actually got to take the underwater shots from our Maui trip), but that was as much effort as went into having any camera with us. And when I actually did attempt a few shots during the ceremony, I quickly was alerted by a little symbol on the back display that the battery had not been recharged. Of course, from my position at the far end of about six rows back (against the wall) it's not like the few shots I got were coming out that well, so the battery dying likely was a blessing of sorts that kept me from bothering with more.

Read the rest of this uselessness >>
posted at 6:25 AM 4 comments:
Email ThisBlogThis!Share to TwitterShare to FacebookShare to Pinterest
Labels: admitting too much, photography

Email in its place

Given how email is far and away the predominant method of communication I use at work it may seem odd how little I send emails from my personal accounts when I'm at home. A decade ago I would sent out personal emails with some regularity but now if I have something to say to folks in general I would just post it here on the blahg, or (intermittently) write it on my Facebook wall. (Also, for my personal email accounts, were I to try to send a message to a large number of recipients it would get rejected as spam, so there's little point in attempting that.)

My personal email addresses become more something to use to associate with the logins for various websites, and thus that means many of the email I receive in those accounts prove to be those sites promoting something. At work my inbox is mostly filled with items I need to do or be aware of; at home my inbox is mostly filled with items I'll delete without bothering to read them all the way through.

Read the rest of this uselessness >>
posted at 8:17 PM 1 comment:
Email ThisBlogThis!Share to TwitterShare to FacebookShare to Pinterest
Labels: admitting too much

And a partridge in a... bowl of pears 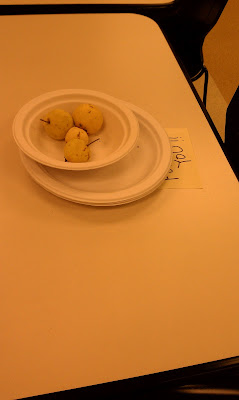 When putting out fruit for co-workers in the break room, be careful not to let plates cover parts of the note.
posted at 10:29 PM 1 comment:
Email ThisBlogThis!Share to TwitterShare to FacebookShare to Pinterest
Labels: real life adventures

What's perhaps really sad is that it's already Thursday and I haven't mentioned the best part of the previous weekend.

When we were planning the visit to relatives for Thanksgiving my wife made it clear that we had to come home on Friday because we had a "seminar" on Saturday afternoon to which she'd gotten us tickets. She explained it as a surprise so I didn't press for details. She said it would be good for our marriage.

So on Saturday we headed up to Hollywood, parking at the Hollywood & Highland center, and walking across the street. Then as we were almost there she handed me the tickets she'd printed out and had me read the address.

They were tickets for The Muppets showing at the El Capitan theater. 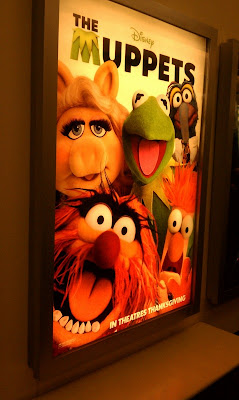 Read the rest of this uselessness >>
posted at 7:45 AM 1 comment:
Email ThisBlogThis!Share to TwitterShare to FacebookShare to Pinterest
Labels: movies, real life adventures
Newer Posts Older Posts Home
Subscribe to: Posts (Atom)
"All art is quite useless." - Oscar Wilde. This useless... art (?)... chronicles the musings of me, Doug.