Homeland in our home

Over the long weekend my wife and I finally got around to watching most of the first season of Homeland (which we had recorded some months back during a free Showtime weekend). We did so after finally catching up on the first half of this final season of Breaking Bad. That may have been a mistake.

Given that Homeland essentially swept the recent Emmys we may have held tacit expectations about its quality that we might not have held had we been watching it as it initially aired, but that's not how things worked out. We're not quite through all of them, but we have only two episodes left to watch so we think we have a reasonable sense of the show. And we both have the same opinion: It's good, sure, but there's no way it is superior to the remarkable fourth season of Breaking Bad.

Read the rest of this uselessness >>
posted at 10:46 PM No comments:
Email ThisBlogThis!Share to TwitterShare to FacebookShare to Pinterest
Labels: admitting too much, TV

Stoned after all these years

With their upcoming shows in London (the first tomorrow) and the New York area, with the possibility of more not ruled out, it seems an opportune time to ask: Should the Rolling Stones still attempt a tour in 2012, fifty years into their career? Artistically, probably not; their best songs and performances are well in their past. But is there something vaguely optimistic about the notion that somehow they not only lived long enough to still tour but have their faculties sufficient enough to at least perform on a tour? I suppose I have to think there is.

I've never seen the Stones live, and there's no way I will go see them for this latest effort (even if I could afford it). It's not that I dislike their songs; I was more of a Beatles fan, but I enjoy many of the tracks they put out, with Exile on Main Street and greatest hits discs plus assorted other tracks in my collection; I just downloaded some of December's Children last week as a matter of fact. (The opening of "Gimme Shelter" is undoubtedly the greatest beginning to any rock song ever, and the rest of the song is fantastic.) They absolutely deserve their spot in echelon of rock history.

If I could go back in time and see them in their heyday, I might consider doing that, but to see them now doesn't interest me. But do I begrudge any fans who want to go see their favorite band, presumably again, and quite possibly for the last time? Absolutely not. Had I seen the Stones back in that aforementioned heyday and had those fond memories I certainly can understand wanting to ride that nostalgia train one more time. And it's not like the band is oblivious to what they're providing nor that the fans are oblivious to why they're going.

Read the rest of this uselessness >>
posted at 4:28 PM No comments:
Email ThisBlogThis!Share to TwitterShare to FacebookShare to Pinterest
Labels: music, rumination 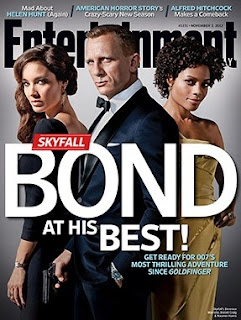 The cover of last week's Entertainment Weekly declares in 2012 "Bond at his best," touting the latest Bond film, Skyfall, as the "most thrilling since Goldfinger."

I don't know that I'd go that far. (My brief take on it is below.) When someone asked me what the best Bond film was, my response: There is no best Bond movie (although if there were one, it would star Sean Connery as 007, of course), at least as far as I can recall.

Despite having seen and enjoyed most (if not all) of the James Bond movies—many more than once, thanks to the frequency they're aired on TV—I must admit I have some difficulty remembering the full plot of any given film. I recall scenes, but sometimes I cannot recall in which particular movie they appeared.

Read the rest of this uselessness >>
posted at 3:19 PM 1 comment:
Email ThisBlogThis!Share to TwitterShare to FacebookShare to Pinterest
Labels: admitting too much, movies, pop culture

I must admit: It seems kind of wrong for West Virginia to be in the Big 12 conference with teams from Texas, Oklahoma and Kansas. That northeastern state seems too far away from the southern middle states. However, looking at a map, the distance from, say, Manhattan, Kansas (home of Kansas State) to Morgantown, W.V.--981 miles--and comparing that to the distance between Los Angeles (USC, UCLA) and the Seattle (Washington)--1,135 miles--it's actually closer than those universities who have been facing each other as part of the Pac (now) 12 for decades, and they don't seem odd.

Thus, it's probably more a matter of getting accustomed to the Mountaineers facing the teams from the flatlands. Years from now a rivalry with the Red Riders of Texas Tech may seem perfectly sensible, despite the 1,465 mile trek.

Things that we consider the standard now at one point were new and weird. Take how in the NFL the Cowboys have made their rivals teams from even farther to the east than West Virginia; in the pros, Dallas is an "eastern" city, and after 42 years no one blinks an eye.

Read the rest of this uselessness >>
posted at 10:33 PM No comments:
Email ThisBlogThis!Share to TwitterShare to FacebookShare to Pinterest
Labels: sports

People who spend too much time with their families wish they had more demanding jobs.

There is a balance to be struck even in the best of circumstances.

posted at 7:27 AM No comments:
Email ThisBlogThis!Share to TwitterShare to FacebookShare to Pinterest
Labels: pithy

This may sound odd, but sometimes when we watch a show recorded within the week or so we forget that we're watching a recorded program and don't reach for the remote to fast-forward through the commercials; those ads often are the same ones we see when watching live programming, and it doesn't strike us right away that we don't have to sit through them. (I'm sure advertisers would be happy to hear that.)

When we record something and don't get around to watching it for a few months (those shows that stacks up in the queue because we are interested but not enthusiastic) the commercials tend to be obviously different than the sort that are airing currently; an ad promoting a Presidents Day mattress sale is particularly blatant, but something slightly more subtle, such as an Old Navy spot where they're pushing short pants, proves equally distinct when watched well into autumn. There the flags to push that remote control button are up quickly. But generally with something that aired only a little over a week prior to actually watching it the commercials don't tend to be that different.

Of course, there are notable exceptions to that rule, and they are very much in effect.

Read the rest of this uselessness >>
posted at 9:39 PM 1 comment:
Email ThisBlogThis!Share to TwitterShare to FacebookShare to Pinterest
Labels: politics (sorta), TV

State of our nation: You're okay, but look at these idiots

The latest This American Life episode (which I didn't listen to until yesterday) talked about the "Red State/Blue State" divide. It featured a story about friendships that ended due to political differences, and focused at the end on two sisters who barely had a relationship because one was a Democrat and the other a Republican. The correspondent found two friends—one liberal and the other conservative—who wrote a book together about not so much bridging that gap but coming to grips with it. The method was to sit down and try to understand the other person's point of view and not seek to persuade that other person to yours.

Read the rest of this uselessness >>
posted at 6:56 AM No comments:
Email ThisBlogThis!Share to TwitterShare to FacebookShare to Pinterest
Labels: politics (sorta) 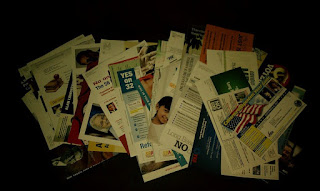 Above is a shot of all of the election-related mail we received just over the last couple weeks. Regardless of which candidates and propositions get the most votes, the winner is the print shops who were hired by the campaigns.

Get out and vote. You only get so many opportunities for your ignorance and personal biases to influence the running of the country; don't squander them.

Read the rest of this uselessness >>
posted at 6:55 AM No comments:
Email ThisBlogThis!Share to TwitterShare to FacebookShare to Pinterest
Labels: politics (sorta), sincerony
Newer Posts Older Posts Home
Subscribe to: Posts (Atom)
"All art is quite useless." - Oscar Wilde. This useless... art (?)... chronicles the musings of me, Doug.