The Digital Present Saves Music's Past 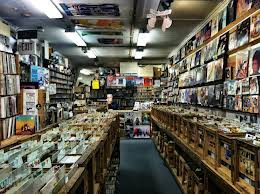 Hey, fellow old timers: Remember when you'd hear a song that really made you want to go out and get it? Remember how if it was late at night you'd have to wait until the record store opened? As much as we recall all that anticipation fondly, we have lived to see the new paradigm, and frankly it's got its benefits. Did you ever go to the store only to find they were sold out of that album you sought (perhaps because it wasn't the current "in" thing that had its own end cap display)? Yeah, much as we do have fond thoughts of record stores (and I certainly endorse people to support their local shops if so inclined), that part we choose to block.

To me the advantage online music outlets (iTunes, Amazon, eMusic, etc.) have these days is how they don't have space limitations like brick and mortar music stores do. The immediacy of downloading is a convenience, but the fact they don't seem to have to restrict what they carry because they lack room in the bins (although they do have restrictions based on contracts with the labels, but that's legal, not physical) is the advantage. Not only does this allow for the obscure to be included with the popular, the back catalog and works of artists who have faded from the spotlight can still be found.

It's not that being middle-aged makes me dislike the contemporary stuff being released these days (I quite like the recent Wax Idols album, for example), but I cannot claim that the current scene appeals to me like what was the current scene twenty years ago. So what I am getting these days includes a reasonable amount of the material that I missed before, perhaps because I was too young (or not even born) at the time to have been into it (and never went through a phase) or maybe because I was too distracted by what I fancied at the time. With age I have not lost that inclination to keep finding songs that are new, but now some of those are actually quite old and merely new to my ears.

Read the rest of this uselessness >>
posted at 12:40 PM No comments:
Email ThisBlogThis!Share to TwitterShare to FacebookShare to Pinterest
Labels: admitting too much, music, rumination

Attention people who make commercials and promos: I don't care how much you love Icona Pop's "I Love It". No matter how catchy it is (and sure, it is), it ceased being effective BECAUSE YOU ALL USED IT.

Unless you were trying to turn me off about whatever your spot was promoting, in which case: Mission accomplished.

And if you thought it would be some way of getting me to link to the noted ads, you're really stupider than I thought.

posted at 7:56 AM No comments:
Email ThisBlogThis!Share to TwitterShare to FacebookShare to Pinterest
Labels: music, ranting

There are moments when I wish I could go back in time 25 years and tell my young adult self that when I go to concerts to buy two of the t-shirts—one for immediate wear and the other to pack away in a box to pull out 25 years later.

Oh, and make sure the second one is XL.
posted at 8:16 AM 1 comment:
Email ThisBlogThis!Share to TwitterShare to FacebookShare to Pinterest
Labels: music, pithy

Skirting around the lip of the U.S. Open

Over the weekend we visited my dad. Some of the time was spent merely sitting in the living room, chatting while the U.S. Open was on the TV with the sound off. What is noteworthy about that was how despite the fact none of us in the room were players of golf, and I have at best a cursory knowledge of the rudiments of the game (with no interest in playing it), we still were drawn into the proceedings on the screen.

Without having any particular rooting interest we nonetheless winced as a Phil Michelson* putt skirted along the lip of the cup and then rolled away rather than dropping into the cup. This merely underscored what seems a basic human trait: empathy. Without any particular emotional investment we still felt for the disappointment of another in just missing while attempting a specific goal.

Read the rest of this uselessness >>
posted at 9:55 PM No comments:
Email ThisBlogThis!Share to TwitterShare to FacebookShare to Pinterest
Labels: rumination, sports

No (superhero) justice for the ladies 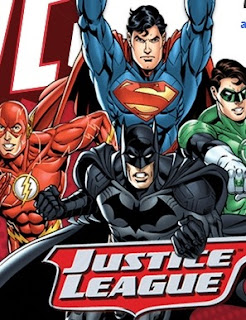 While briefly online this morning I noticed on FB a bit of a rant by a friend where she lambasted the paltry appearance of Wonder Woman in the new Justice League merchandise at Target. (I presume she sought items with the Amazon princess for her daughter, but heck, her aim may have been for herself.)

On the site was the picture above of the JL featuring only Superman, Batman, Green Lantern, and the Flash, leaving out WW altogether (but if one scrolls all the way over to the right one will find her, as shown below). My friend understood why (marketing towards boys), but still lamented that a strong female character couldn't be included with the other heroes. Would that really be so damaging to our nation's boys? 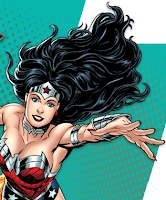 Read the rest of this uselessness >>
posted at 8:12 AM 2 comments:
Email ThisBlogThis!Share to TwitterShare to FacebookShare to Pinterest
Labels: only making it worse, pop culture, seemed like a good idea at the time

When people on TV sign off by saying "See you tomorrow" (or "next week" or whatever time period applies), it makes me wonder if they understand how cameras work. Then I wonder if they have some ties with the NSA we haven't learned about yet.

IS IT A CODED WARNING?!

Arresting the Development of TV Binge-Watching

As the entire internet is duly aware, Netflix released new episodes of Arrested Development weekend before last. In quasi-preparation for that debut my wife and I spent many hours in the preceding weeks re-watching the first three seasons through that online provider, being reminded of how much we enjoyed it back when it first aired (even the uneven third season), getting through the original finale in the late afternoon on Memorial Day.

Between then and the next weekend we have watched... three of the new episodes. And without spoiling anything (as we've been trying that to avoid by not reading reviews yet), our impression is... it's okay, with its moments, but generally unimpressive.

I'm not sure if having binged on those first three seasons raised our expectations for the "fourth," or if we simply tried watching them at inopportune times (twice my wife and I have started to drowse during them, on a warm, sunny afternoon, after eating), or if it's still too soon for us to judge (without seeing all the new episodes yet), but I can already say it's not inspiring us to want to keep watching the way gorging on the episodes from roughly a decade ago did.

Perhaps we are watching them ten years too soon. Maybe then the single-characters-focused, overlapping narratives will seem like genius.

But not watching them all in one big viewing gulp.

Read the rest of this uselessness >>
posted at 8:13 AM No comments:
Email ThisBlogThis!Share to TwitterShare to FacebookShare to Pinterest
Labels: pop culture, TV

Ginning up the nostalgia with supermarket muzak

Hearing the Gin Blossoms' "Hey Jealousy" in the supermarket recently I was reminded of seeing the band (with my friend Frank) at the former Long Beach-based club Bogart's before that song hit it big (about 20 years ago). Then I thought of the age of the track and grasped that in relative temporal terms hearing it now is the equivalent of hearing Loggins and Messina's "Your Mama Don't Dance" (a hit about 40 years ago) while strolling through the aisles back during the time when "Hey Jealousy" was in rotation.

Read the rest of this uselessness >>
posted at 7:50 AM No comments:
Email ThisBlogThis!Share to TwitterShare to FacebookShare to Pinterest
Newer Posts Older Posts Home
Subscribe to: Posts (Atom)
"All art is quite useless." - Oscar Wilde. This useless... art (?)... chronicles the musings of me, Doug.