Back on the last Saturday morning of March we woke up before dawn—without alarms—and headed down to San Diego (north county first) for the "Butterfly Jungle" exhibit at the S.D. Zoo Safari Park. As they did last year the park had a hothouse filled with exotic butterflies where people could walk through, seeing them close up and possibly even having the winged insects land on them. We headed out so early to get there when it opened (at 9 a.m.) because last year we got there midday and had to stand in line over an hour to get in. 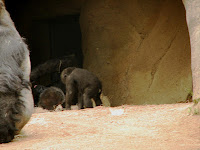 However, this year they'd adopted the practice of having timed entry tickets, so they could try to limit the number of bodies entering by staggering when people can enter. We only had to wait 15 minutes from the time we got inside the park until we could go inside, and that we spent watching the gorillas (where there was a baby born last June, named Monroe, who offered a bonus of cuteness. (Some photos of the gorillas can be seen here.)

The butterfly exhibit was the same as before, except this time it did seem even more crowded. The timed tickets were in 15-minute increments, but the folks inside weren't leaving on that schedule. Once inside you can stay as long as you wish, but the main reason why you would leave is either the crowding or the humidity; being a hothouse, it's pretty warm even without all the bodies in there. That's not the most effective means of dealing with the situation, but at least it didn't involve standing around outside, queued up with nothing else to do beforehand. 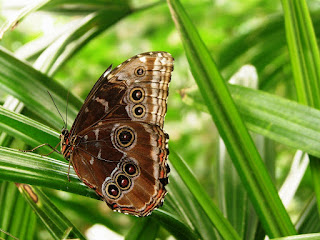 Read the rest of this uselessness >>
posted at 8:16 PM 2 comments:
Email ThisBlogThis!Share to TwitterShare to FacebookShare to Pinterest

So... (explained by Lexicon Valley)

The Lexicon Valley podcast returned this week with an exploration of starting sentences with "So"—not the adverb to enhance meaning ("The meat was so well done that it tasted like leather.") or to indicate "therefore" ("We have no apples so if you want fruit you'll need to eat an orange.") or to mean "to facilitate" ("There need to be an equal number of players on each team so the game will be fair."), but as an indication of a continuation of a interrupted thought ("So where was I? Oh, right…"). However, there's a more and more common tendency to start non-interrupted thoughts with "so" in conversations.

In that case the purpose of "so" (it was suggested) was to direct the conversation in a different direction than it previously had, one that's more germane to a tacit or overt agenda ("So regarding that item you mentioned last week…"), where there's a sort of implicit continuation of something that wasn't necessarily said; it was a segue of sorts.

Read the rest of this uselessness >>
posted at 10:06 PM No comments:
Email ThisBlogThis!Share to TwitterShare to FacebookShare to Pinterest
Labels: internet, our wacky language

Does the way the presidential campaign stretches out for months (and really, years) before the election result in the country electing the better candidate? Does it serve the nation's interests? Would the electorate be better informed by the media covering the current activities of the already-elected officials than telling us what those vying to be Commander-in-Chief say they would do? And does what the media reports really lead voters to contemplate the complexities of the candidates' positions before casting their ballots, rather than going with that gut feeling when in the booth?

In order: Probably not, unlikely, perhaps, and I doubt it.

Read the rest of this uselessness >>
posted at 9:33 PM 1 comment:
Email ThisBlogThis!Share to TwitterShare to FacebookShare to Pinterest
Labels: politics (sorta), sincerony

Learning about Canada from HGTV

So earlier we turned on the TV and it happened to be on HGTV (the network has turned into our throw-it-on-in-the-background channel) and the show airing was Property Virgins, a show about people buying their first homes (the appeal of which, I suppose, is to be educational for others in the same situation and to offer the naïveté of the newbies up for the condescending amusement for everyone else).

This particular episode was a clip show (according to the info from the DirecTV guide) called "Best Of: Fresh Start" and the opening segment featured a couple looking to purchase a house in Toronto. Near the beginning they did interview pieces with both the husband and wife where they listed the things they desired in their dream home.

Read the rest of this uselessness >>
posted at 5:34 PM No comments:
Email ThisBlogThis!Share to TwitterShare to FacebookShare to Pinterest
Labels: our wacky language, TV

Pathetic in The Palace

A couple weeks ago we visited a relative in Detroit, and while we were there we attended the Pistons game at the arena out the suburbs, The Palace, when they were playing the Wizards.

Yes, we were the three there.

Okay, there were more than just us, but as bad as the teams were there certainly were no shortage of empty seats.
We were five rows from the floor. During time-outs the players standing blocked out the cheerleaders on the middle of the court. That close.

Anyway, to drum up excitement in the crowd the "cheer team" throws rolled-up t-shirts and little novelty basketballs into the stands. However, sometimes their arms weren't up to the task.

Read the rest of this uselessness >>
posted at 10:19 PM No comments:
Email ThisBlogThis!Share to TwitterShare to FacebookShare to Pinterest
Labels: admitting too much, photography, sports

Sleeping on "Awake": Why it's okay not to watch good shows

NBC has not been doing well for some time, as any follower of the TV industry is well aware. After last season's Jay-Leno-at-10-p.m. debacle there was a return to scripted shows in that time slot, and they did make some efforts toward quality.

The fall opened with Prime Suspect on Thursdays, which was touted as good by someone I know who saw the pilot before the season (as well as many professional critics). So my wife and I watched the first few episodes and thought them good, but then subsequently it turned into another show accumulating on the DVR queue (along with a number of other shows we were sampling from the new season), not getting watched week after week.

Eventually we realized we needed to make some cuts from the programs that would make our watching line-up, and although it was clearly a well-made show, it didn't have that intangible element to make us clamor to press play on the remote right away; it definitely deserved to stay on the air, but just not something where there was room on our particular airwaves.

Read the rest of this uselessness >>
posted at 6:47 PM 1 comment:
Email ThisBlogThis!Share to TwitterShare to FacebookShare to Pinterest
Labels: admitting too much, TV

The point of "guilty pleasure"

[This is kinda sorta in response to, or at least inspired by, this post on I Will Dare. FYI.]

It's been proffered that in pop culture there should not be such a phrase as "guilty pleasure" (by at least Chuck Klosterman, and probably others), because anything that elicits enjoyment should not be bring with it guilt. Still, the expression caught on because there tends to be consensus amongst those who appreciate a given art form about what is justifiably worth appreciating and what's not. There's some quality that Thing A has that Thing B lacks and therefore to like Thing B is something about which any self-respecting appreciator of Thing A should feel ashamed.

Read the rest of this uselessness >>
posted at 10:12 PM 1 comment:
Email ThisBlogThis!Share to TwitterShare to FacebookShare to Pinterest
Labels: sincerony

Hello Internet: The Simpsons do not live in Oregon

So Simpsons creator Matt Groening admitted in an interview that the inspiration for the name of the town where the fictional family came from the town of Springfield in his home state of Oregon. Given that he named the family on the show after his real life family, it's not surprising he didn't stretch that far for the moniker of the place where they live.

However, then the internet went apeshit claiming that Groening had revealed the Simpsons lived in Oregon, rather than merely that he came up with the name from the location in the Pacific Northwest.

Read the rest of this uselessness >>
posted at 10:29 PM 1 comment:
Email ThisBlogThis!Share to TwitterShare to FacebookShare to Pinterest
Labels: internet, stupidity, TV

Eradicating racial bias at the source

Today at lunch I read a New Yorker piece from their Book Bench blog that talked about a guy who started a Tumblr site collecting all the tweets from people who were from dismayed to outright aghast at how in the movie adaptation of The Hunger Games the characters from District 11 were played by black actors. Even though in the book they are described as dark-skinned, that didn't stop a lot of fans of the book from envisioning sweet little Rue as blonde-haired and blue-eyed. And then some of those people were willing to share those disappointments on the internet.

The thrust of the piece was about how characters in books tend to be envisioned as white unless explicitly identified by the author as otherwise (and the hurdle that minorities face in society in general out of that connotation of white with innocence). Certainly it's a fine idea to work toward a world where Caucasians aren't the default race in the collective mind, but rather than merely identify the issue, how can we achieve that?

Read the rest of this uselessness >>
posted at 10:21 PM 1 comment:
Email ThisBlogThis!Share to TwitterShare to FacebookShare to Pinterest
Labels: movies, sincerony
Newer Posts Older Posts Home
Subscribe to: Posts (Atom)
"All art is quite useless." - Oscar Wilde. This useless... art (?)... chronicles the musings of me, Doug.