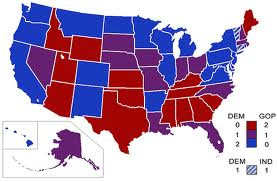 When people in the media refer to "purple states"—those where the populace falls between being mostly a (conservative) "red" state or mostly a (liberal) "blue" state, that clearly is thinking in terms of dyes, where red and blue make purple.

However, on the spectrum of light waves, obviously purple (violet) is nearer to blue than to red, and is not between those two colors.

posted at 5:56 AM No comments:
Email ThisBlogThis!Share to TwitterShare to FacebookShare to Pinterest
Labels: pithy, politics (sorta)

(You thought I was going to make a joke about how it will be much easier to see Russia from her house, but that seemed a bit too obvious.)
posted at 9:40 PM No comments:
Email ThisBlogThis!Share to TwitterShare to FacebookShare to Pinterest
Labels: pithy, politics (sorta)

I know we need to keep resisting this buffoon who is currently in the Oval Office and his ridiculous cabinet and his poorly considered policies, and certainly we should, but just in case that doesn't work out I have this humble request:

If it looks like we're all going to succumb to despair, all I ask is that someone give me a heads-up as early as possible so I can do it without just seeming like I'm jumping on the bandwagon.

Thank you.
posted at 9:49 PM No comments:
Email ThisBlogThis!Share to TwitterShare to FacebookShare to Pinterest
Labels: politics (sorta), stupidity, tongue-meet-cheek

Our three-year-old son has taken to occasionally wanting to hold my arm for a few seconds as a soothing gesture when I put him to bed. And it's not my wrist he seeks but my bicep; he has even gone so far as to ask me to roll up my sleeves to grant him better access to that part of the upper arm.

As a parent of a pre-schooler, I am generally tired and will appease him because it means he will go to sleep faster.

At first I thought he found it comforting to touch the muscle, as though it made him feel safe to be near his strong Daddy. Then he started squeezing my bicep and gleefully saying it was "squishy."

Here's the thing: I am absolutely certain in his mind that is a colossal compliment. That his father has a part of the arm which he can squeeze is apparently what makes him feel better in those moments after I've turned off the light in his room.

It is that oblivion that makes it somewhat endearing, and allows me to put aside societal conditioning about musculature when he specifically asks for "the squishy part" (as has become his preferred phrasing).

I could be more physically fit (of course), but rather than this inspiring me to hit the gym I am merely pleased he hasn't figured out a way to try to grab my stomach. Which I'm sure will only be a matter of time until he does.

And I'm sure I'll learn to live with that, because while I may only be doing so-so when it comes to being "in shape" I can roll with such things by being in reasonably decent parenting condition. Or, again, too tired to object.
posted at 9:55 PM No comments:
Email ThisBlogThis!Share to TwitterShare to FacebookShare to Pinterest
Labels: admitting too much, parenting, real life adventures
Newer Posts Older Posts Home
Subscribe to: Posts (Atom)
"All art is quite useless." - Oscar Wilde. This useless... art (?)... chronicles the musings of me, Doug.