Hang Up and Listen started off a recent episode with talk about the baseball season in the midst of the pennant race, with only a couple weeks left before the end of the season. This year's postseason will feature the first time 10 teams will qualify for the playoffs, up from 8 (as it has been since the last expansion in the mid-'90s). The difference is this year in addition to the six division winners there will be two wildcard teams in each league who must face each other in a one-game playoff, vying for the opportunity to then face the team with the best record in a best-of-seven series.

When the leagues realigned into three divisions rather than two, they had to include a fourth non-division winner into the playoffs to have an even number. Previously there were only two division winners per league, so it was already even, but an odd number of divisions necessitated a wildcard. Fair enough. But now expanding the field to include a second wildcard puts MLB in the same position the NFL faces in its postseason: some teams have to play more games in the playoffs than others, which seems categorically unfair.

Read the rest of this uselessness >>
posted at 8:15 AM No comments:
Email ThisBlogThis!Share to TwitterShare to FacebookShare to Pinterest
Labels: rumination, sports


2012: The year the entirety of the NFL season will be featured in a future "Football Follies" series.

The NFL has been too predictable, what with all the following of the rules the regular refs had been imposing.

That Green Bay/Seattle MNF game has already sewn up next year's primetime Emmy for Best Comedy.


posted at 9:30 PM No comments:
Email ThisBlogThis!Share to TwitterShare to FacebookShare to Pinterest
Labels: seemed like a good idea at the time, sports

Drinking it in: Thoughts on the NYC soda ban

On the subject of the large soda ban in New York City (which has been passed by the city Board of Health now), even though I live all the way across the country, I suppose I should have an opinion. I mean, I am one who has consumed more than his fair share of carbonated beverages over the course of my life—and still do, in large part because I never developed a taste for coffee; when we go out to breakfast, my caffeine fix comes with bubbles in it.

When I was in my 20's there were days when I probably consumed more than 100 ounces. It wasn't every day, but it wasn't necessarily a rare occasion either. I'm not suggesting this is laudable in the slightest; I'm merely admitting my connection with the item.

Should anyone actually drink that much soda? Of course not. But did it do me in? Thus far, no. Clearly my body was able to process it without making me diabetic. However, we're talking about me doing this when I was already an adult; I didn't drink that much pop when I was a child, so perhaps by shifting my time of indulgence to when I was not developing I avoided the worst of it. Or perhaps it's mere dumb luck. I'm not suggesting my experience would be representative of most people.

I cannot drink anywhere near that much anymore (my body will make me regret it), and I know better than to, but it's not as though I gave up drinking pop altogether. The reality is I like the taste of it.

Read the rest of this uselessness >>
posted at 12:34 PM No comments:
Email ThisBlogThis!Share to TwitterShare to FacebookShare to Pinterest
Labels: admitting too much

Why Museums Confuse Me

Earlier today my wife and I visited the Getty Villa, seeing (among other things) their exhibit on Pompeii. Afterward we stopped in the museum gift shop, and I noticed this book on a shelf on that topic, called Pompeii: The Living City: 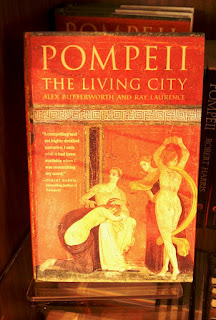 Read the rest of this uselessness >>
posted at 7:36 PM No comments:
Email ThisBlogThis!Share to TwitterShare to FacebookShare to Pinterest
Labels: glib reactions, real life adventures

For those of you haven't visited the photo site since the last time I mentioned it, be advised that if you click on over you'll see more spiffy photos from last month's trip to Kaua'i, including such subjects as:

And if you don't then you'll miss out, so do it.

Later? Sure, later is fine. They're not going anywhere.


posted at 9:15 AM No comments:
Email ThisBlogThis!Share to TwitterShare to FacebookShare to Pinterest
Labels: photos

IKEA has this commercial wherein a child ("Leo") is placed on "time-out" by a mother who then disappears from the room, and the boy then proceeds to crash himself into the kitchen cabinets repeatedly. The tag line offered in voiceover at the end: "Some things won't last 25 years. Some things will."
While I presume the implication of that statement is touting the durability of the cabinetry offered by the Swedish-based furniture store, I cannot help but think the flip side is suggesting this sort of absentee parenting will prevent the child from reaching his 25th birthday. Although I don't necessarily disagree, based on what we see in the ad, it does seem a rather morbid take on trying to sell affordable home products.

It even backfires on that. Heck, in that scenario there's no point in saving for college, so you may as well go buy better cabinets than would be offered at IKEA.

This shows why watching DVR'ed shows and fast-forwarding through the commercials is actually better for advertisers; there's nothing to over-analyze at double-speed.

I've already written about my wife and I running into Old 97's front man Rhett Miller at a burger place before the band's recent L.A. date. The part I didn't mention in the post was a moment between Rhett and me as my wife fumbled to get her phone to Rhett's friend for a photo. Rhett asked if we lived in L.A., and I responded that we did, throwing in how I used to see him in his solo shows at Largo. In that moment I recalled that over a decade ago at one such show I gave him a copy of a mix CD I'd made, and I mentioned that.

Read the rest of this uselessness >>
posted at 11:36 PM No comments:
Email ThisBlogThis!Share to TwitterShare to FacebookShare to Pinterest
Labels: music, real life adventures, seemed like a good idea at the time

I-beam recovered from the North Tower, taken last month at the Orange County Fair (taken by my wife). 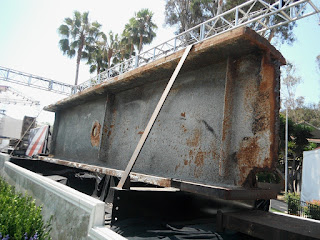 posted at 7:42 AM No comments:
Email ThisBlogThis!Share to TwitterShare to FacebookShare to Pinterest
Labels: photos

Sometimes I think the reason we humans require sleep is not so much that we need rest but because that delineates time into distinct parts (i.e., days). Why does that matter? It facilitates the delusion necessary for existence: that tomorrow could be better than today.

Experience instructs us that some tomorrows will be better (even if only by relative standards) and many will not, but we require that period of unconsciousness to give us the opportunity to awaken and feel like there's some greater chance for change than there was at the end of the day before. Also, going to sleep provides that conclusion to a day that, whether it was good or not-so-good day, needs to conclude; any good day that drags on longer than it should turns, and any bad day isn't worth staying awake to wait for it to improve.

Read the rest of this uselessness >>
posted at 9:32 PM 1 comment:
Email ThisBlogThis!Share to TwitterShare to FacebookShare to Pinterest
Labels: rumination

Attention reader of words: If you could use a break from all this text, be advised that over on the photo site I have added posts featuring waterfalls on Kaua'i, taken during our recent vacation to the island.

Click on over to have a look at these sights:


posted at 8:03 PM No comments:
Email ThisBlogThis!Share to TwitterShare to FacebookShare to Pinterest
Labels: photos

The night my wife told Rhett Miller about our first date

Last night after work my wife and I headed to the mid-city part of town; the Old 97's were playing a show at the El Rey Theater, and we had tickets for the show. We got there well before the doors even opened so after we parked we went across the street to the Five Guys Burgers for dinner. After we ordered she went to the restroom on the way and from across the dining area she started gesturing toward the corner. It wasn't   an open table, but the band's front man Rhett Miller and a friend eating there. No one else in the place seemed to recognize him, but such is the thing about the band's popularity is such that only fans would spot them off-stage.

I used to see Rhett perform solo acoustic shows with some regularity years ago when he lived in L.A., and talked to him on occasion afterward. He's almost ridiculously friendly, and happy to talk with fans. Still, I wasn't going to bother him while he was eating, and I figured my wife would be too nervous sitting near him. (She can get a little... how to put it?... awkward around celebrities she likes.) However, when she emerged from the ladies' room she motioned for us to sit at the open table right next to where Rhett was sitting.

Before we even got our food, she simply could not control herself and politely interrupted Rhett, because she had to tell him the story of the role he played in how we are married today.

Read the rest of this uselessness >>
posted at 8:29 PM 3 comments:
Email ThisBlogThis!Share to TwitterShare to FacebookShare to Pinterest
Labels: music, real life adventures
Newer Posts Older Posts Home
Subscribe to: Posts (Atom)
"All art is quite useless." - Oscar Wilde. This useless... art (?)... chronicles the musings of me, Doug.