Singing to my son in the bath again: the Duran Duran / Billy Joel (non) connection... and the Pixies commercial

While bathing my infant son I tend to occupy those moments by singing or humming tunes to him. Unlike what one might expect I don't go with lullabies or traditional children's songs but whatever happens to be stuck in my head (which I can still get away with because he has no grasp of what I'm singing).

Something I realized while doing so recently: The guitar riff in Duran Duran's "Planet Earth"...

...is very similar to the melody of the "whoa-o-a-o-ah" vocals in Billy Joe's "Uptown Girl."

Read the rest of this uselessness >>
posted at 9:12 PM No comments:
Email ThisBlogThis!Share to TwitterShare to FacebookShare to Pinterest
Labels: admitting too much, music, parenting

Back in my youth comic books drew some level of dismissal by the larger culture, but now of course "nerd culture" is mainstream. That acceptance seems like a step in the right direction, but those steps can go too far.

With the movie X-Men: Days of Future Past coming out soon the commercials are running heavily. However, yesterday I saw one that proved to be a cross-promotion… with Axe Body Spray—perhaps the epitome of douchebaggery. And while the distinctions were somewhat nebulous in those days of past (when only the nerds would know the X-Men story on which the movie is based) such products would never be explicitly marketed to such a demographic. I'm not saying there was no crossover between nerds and douchebags—of course there were was—but that was not considered a desirable group for advertisers. 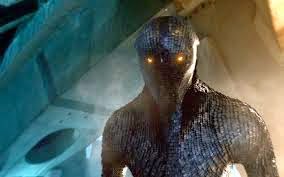 It's enough to root for the Sentinels to wipe out everyone; neither humans nor mutants deserve to survive in a world where would happen.

We need to send someone back in time to stop this...


posted at 8:36 PM 1 comment:
Email ThisBlogThis!Share to TwitterShare to FacebookShare to Pinterest
Labels: movies, only making it worse, pop culture
Newer Posts Older Posts Home
Subscribe to: Posts (Atom)
"All art is quite useless." - Oscar Wilde. This useless... art (?)... chronicles the musings of me, Doug.