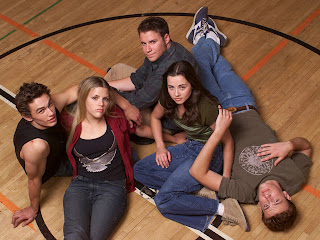 Fun with TV overlap, 13 years after Freaks and Geeks:

Lindsay Weir has a 17-year-old and is sleeping with Don Draper.

Nick Andopolis has a toddler and is happily married to Willow.

Daniel Desario has no children and bombed as Oscar host.

Kim Kelly, not surprisingly, consumes a fair amount of wine.

Seems pretty clear who has most to brag about at the reunion. Or at least who would be most popular at such an event.

posted at 9:20 PM No comments:
Email ThisBlogThis!Share to TwitterShare to FacebookShare to Pinterest
Labels: seemed like a good idea at the time, TV

Public profanity: A short guide to using it

Many would argue that the use of profanity in public has spun wildly out of control over the past few decades, and there'd be little denying standards are much looser than in my parents' day. However, there are moments when it fits perfectly with a given public situation.


For years to come I imagine a primary example of that scenario to be cited will be David Ortiz's speech before Saturday's Red Sox game—the first after the Boston Marathon bombing suspects were killed and captured.

Read the rest of this uselessness >>
posted at 8:58 PM No comments:
Email ThisBlogThis!Share to TwitterShare to FacebookShare to Pinterest
Labels: not for kids, pop culture, sports

A couple week's ago friend on Facebook asked me about my stance on the new Replacements' "album." This was close to the time we go to bed and I wasn't inclined to get into a long analysis, so I replied simply: "Well, it's an EP of covers, unpretentiously played and produced. I enjoy it."

And that sufficed at that hour.

Read the rest of this uselessness >>
posted at 6:15 AM No comments:
Email ThisBlogThis!Share to TwitterShare to FacebookShare to Pinterest
Labels: admitting too much, music

The Rolling Stones' "Paint It, Black" has that punctuation not because the band intended it but because the label made a typo back at the time of its release. And it continues to be listed that way on their albums to this day.

posted at 10:47 PM No comments:
Email ThisBlogThis!Share to TwitterShare to FacebookShare to Pinterest
Labels: music, our wacky language, pithy
Newer Posts Older Posts Home
Subscribe to: Posts (Atom)
"All art is quite useless." - Oscar Wilde. This useless... art (?)... chronicles the musings of me, Doug.