AUC: You say you want a revolution? Well…

Last Tuesday was the fifth-annual Buy Nothing Day, as organized by the Media Foundation, publishers of Adbusters magazine. You probably bought something.

The idea behind Buy Nothing Day is to remind the capitalist establishment that it is we, the consumers, who buy their products, and without us, they are nothing. Much as their clever advertising tries to turn us into sheep with checkbooks, we ultimately have the power. If we all refrain from spending for a 24-hour period, The Powers That Be would notice.

Well, maybe. I mean, in theory this is true. In theory, communism works.

It is said that the people united will never be defeated. But I have a hard time getting a group of my friends to agree on a restaurant. And these people like each other. How are we to get a whole society to agree on anything, much less a direction for our future?

Every journey begins with the first step. But which way? Will we like it when we get there? And does the cable system there carry Comedy Central?

Besides, isn’t that the job of The Powers That Be, that elite minority to whom we have abdicated control of our lives? Sure, every four years or so they throw us a bone and let us think that we have some influence. A delightful amusement for them, no doubt, and we get to feel we’ve contributed.

They’ve set up quite a situation: whom to believe? Every statistic can be manipulated. Every “fact” can be refuted. Every Snickers is packed with peanuts. So much for reason. We follow whomever has the least offensive agenda. Or the cutest butt. On second thought, it’s probably the butt thing.

It’s sort of like playing Risk: the easiest way to win is to let the other players fight it out, then roll over their decimated armies with your culminated forces. We bicker amongst ourselves (or more accurately, we stop bickering and wallow in apathy after contemplating our lackluster choices) and the status quo is maintained. It’s insidiously ingenious.

But back to uniting the masses. Idealistic notions of equality, like labor unions and communist rule, get perverted. Take, for example, when Homer Simpson was elected union president:

Perhaps Marx and Engels should have had better foresight, or a proper lack of faith in humanity, and abandoned hopes of worldwide revolution. If I could go back in time, I might suggest they start small and try the agree-on-a-restaurant thing first.

The problem, again, is people. We can envision Utopia, but by our selfish nature, we are a poor choice to lead ourselves there. Unfortunately, until we get another species to take control, like the dolphins, we are our only option.

In the end, despite our best efforts of the Media Foundation, we probably are sheep with checkbooks. (And admit it: when you read the explanation of Buy Nothing Day, you wondered what the Media Foundation hoped to gain from it, didn’t you? Everybody has an angle, right? Is there such a thing as philanthropy in a capitalist society? How many licks does it take to get to the center of a Tootsie Pop?)

Personally, I hope to be a clever sheep, keeping The Powers That Be guessing. If they’re going to fool me, I’m going to make them develop new ways of doing it. Capriciousness is our trump card, kids.

Remember: the sheep united can “bah” really loud at night and keep the shepherds from getting a good night’s sleep.

posted at 10:50 AM No comments:
Email ThisBlogThis!Share to TwitterShare to FacebookShare to Pinterest
Labels: college writing

[The following appeared on the Grunion (satire page of the Long Beach Union, student paper at Long Beach State), September 23, 1996] 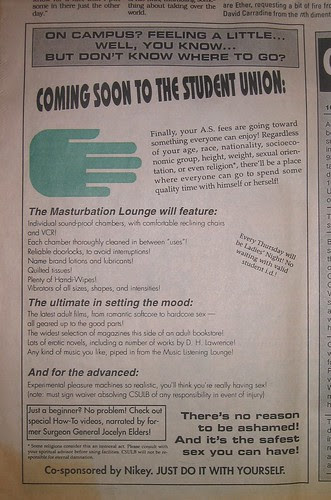 [click on the image to bring up a somewhat clearer image--if you dare!]

AUC: Smoke, and the whole world coughs with you

I have to share a conversation I overheard the other day. Returning to work from lunch, I came in just behind two women who had been outside on a smoke break. One, approaching middle age, was telling birth stories to the other, clearly younger, woman, who listened with the earnestness of one who has never been pregnant.

As we climbed the stairs to the second floor, the older woman noted that she was lighting up virtually the minute she was out of the delivery room.

The most difficult part of childbirth, apparently, had been going hours without a cigarette.
At the top of the stairs, they walked in the opposite direction from me, but before they were too far away, I heard the younger woman say she might have to have an abortion if pregnancy meant nine months of tobacco abstinence.

Now, you reaction to that may have been: “What a horrible thing to even joke about!” Or you may have thought, “Yeah, nine months without a smoke, that’s rough.” Or you may still be reeling from seeing Al Gore do the Macarena, and can’t concentrate.

Whatever your opinion, like abortion, you believe it strongly.

For the record, I don’t smoke. Never have. My mother smokes, as do many of my friends. Children of parents who smoke tend to either become smokers themselves or ardent anti-smokers. I fall into the latter category, but the interesting thing is that I find I am only bothered by strangers who smoke. I’m not crazy about the fact that my mother smokes, but when I’m around her, she’s not a smoker, she’s just Mom.

Hypocritical? Of course. But we can overlook unpleasant habits in our acquaintances. We’re aware of at least some redeeming aspect they possess. That stranger whose cigarette smoke wafts too close is just an inconsiderate asshole.

I think it’s important to draw a distinction between people who smoke and smokers. The former are people who engage in inhaling the fumes of burnt tobacco (and nicotine, etc.). The latter are people for whom this practice is their defining characteristic. Think what you will about the younger woman in the aforementioned exchange, but at least she knows better than to get pregnant.

A certain camaraderie exists amongst smokers. Perhaps they bond as members of a persecuted group. Maybe it’s the fact that one can tell at a glance, “Hey, there’s someone else who’s choosing to do horrible things to their lungs.” It’s a support group kind of thing: a smoker isn’t going to give a fellow smoker a hard time.

Yes, smoking’s bad, yadda yadda yadda. But we should all exercise more. We shouldn’t eat so much fried food. Hell, we should escape this smog-infested armpit of the world if we’re really concerned about our health.

In a way, smokers have an advantage that we non‑smokers don’t: someday, when they get cancer, they’ll know exactly why, and they will have had years of nicotine-enriched pleasure getting it. When we non‑smokers come down with terrible illnesses, we won’t know who to blame. Smokers can look to the tobacco industry and the beautifully evil people who run it and say, “Thank you, it’s all your fault.”

The clever demons who produce cigarettes have made their product terrifically addictive. Despicable, yes, but perversely admirable in a business sense.

However, this just keeps the customer coming back. What makes someone start? Who knows for sure. Peer pressure? Advertising? I have to wonder, “Could the most amazing ads sway people to subject themselves to something so clearly bad if they didn’t have a predilection for it in the first place?”

Anyone influenced by cigarette ads gets what they deserve. Have some self-esteem, take some responsibility. Be young, have fun, drink Pepsi. Hey, wait a second…

posted at 10:44 AM No comments:
Email ThisBlogThis!Share to TwitterShare to FacebookShare to Pinterest
Labels: college writing

AUC: Nowhere to go but up… must we go?

Ah, the first week of the semester, when no matter how much you procrastinate, you can’t be more than a week behind in your classwork. This is going to be it: this is the semester you make it to class every day, take good notes, read the assignment before it’s due, and are prepared enough to get a good night’s sleep before the exam. Yes, this semester will be different.

This may seem pessimistic, but it’s in the best interests of you self-esteem. Really.

Rather than going into this semester with high hopes of academic success—which, let’s face it, history dictates most of us don’t quite live up to—set your sights lower. Instead, think: This semester I’m going to sleep through my morning classes, hang out with my friends instead of attending my afternoon classes, blow off studying in the evening to watch television, and I’ll fail miserably.

One of two things will happen: either you’ll actually get off you duff and do something and manage to pass all your classes, or the above pattern will prove to be your fate. If the former is the case, then imagine your delight when you have so amazingly exceeded your expectations that you will actually feel good about yourself for a while. If the latter comes to pass, well, you can take heart in knowing that you can set a goal and stick to it. You really can’t be disappointed either way.

Of course, you should be warned that if you happen to pass, it will be more difficult to return to your underachieving ways next semester, and you may be tempted to have aspirations again.

Remember, kids, the more classes you pass, the sooner you’ll graduate, and then you’ll have to do something with your life. But on the off-chance that you do eventually get a degree, do not fall prey to the sort of thinking that these collegiate years will make some difference in the rest of your life. Again, they may or may not, and if they do, hey, great. However, if college proves to have left you unprepared for the future, at least you didn’t expect any differently, and all those student loans you have to repay will not be a constant reminder of unrealized potential but just another pleasant debt you incurred along the road of life.

And then one day, as the sun sets on your life and you reflect back on it, you can think: Well, I did lead a life of quiet desperation, but that’s all I ever thought it would be. Thus, you can die a reasonably ambivalent person.

It’s all a matter of setting realistic goals, and expecting much less.

posted at 10:36 PM No comments:
Email ThisBlogThis!Share to TwitterShare to FacebookShare to Pinterest
Labels: college writing
Newer Posts Older Posts Home
Subscribe to: Posts (Atom)
"All art is quite useless." - Oscar Wilde. This useless... art (?)... chronicles the musings of me, Doug.