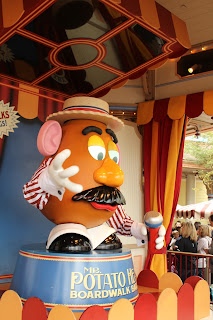 Back on December 7 my wife and I went to Disneyland and Disney's California Adventure—which, for those of you keeping score at home, was our third visit in 2012 (but prior to that we hadn't been since March of 2010, so it's not like we frequent the parks with such regularity). In the past I would have referred to it as merely a trip to "Disneyland" without specifying the other park, but this time we spent more time over on the latter so it seems unfair not to mention it as well. This was, in fact, the first time we've ever selected C.A. as our initial point of entry (rather than going to the Disneyland side first), and the only ride we rode multiple times was over there.

There has been something of a changing of the guard.

Read the rest of this uselessness >>
posted at 4:00 PM 1 comment:
Email ThisBlogThis!Share to TwitterShare to FacebookShare to Pinterest
Labels: admitting too much, real life adventures

Now that we've survived to see another week, I'm reminded of something thematically similar from the day before the election...

While walking back from lunch I noticed several individuals standing on a street corner in downtown L.A., holding large signs that read:

The structuring of the sign left it somewhat unclear as to whether they wanted the City of Angels to be saved or to be smoten by the Almighty. One would think it's the former, but I don't like to be presumptuous.

I can say one thing with certainty: I am not going to change my behavior. I'll keep interpreting the world through this rhetorical perspective, even if it damns this town into oblivion.

Read the rest of this uselessness >>
posted at 9:46 PM 2 comments:
Email ThisBlogThis!Share to TwitterShare to FacebookShare to Pinterest
Labels: our wacky language, real life adventures

Waiting for the End of the World

(Going with the Elvis Costello song rather than R.E.M., because, really, who feels fine?)

It's the 20th of December in 2012 and that means one thing: We've grown weary of hearing about the impending "fiscal cliff" and are focused on the so-called Mayan-predicted end of the world (which, if that comes to pass tomorrow, then it won't really matter if the government fails to reach agreement on our nation's financial future, so there is at least that much). That doomsday thing has reached the point where even the local news was poking fun at it yesterday in their 6 a.m. weather forecast: 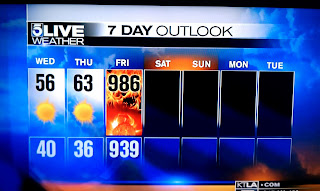 A few months ago this was cause for rumination, with the premiere of the show Revolution and its premise of a world plunged into chaos after the total loss of electricity. Its popularity may suggest we have a bit of an apocalypse fantasy, with an unconscious desire for The End. (For millennia religions and mythologies have stories of colossal termination that have filled people with a longing of sorts, generally based on the promise of paradise afterward, but for our purposes let's pretend now it's some mediocre adventure show on NBC.)

The premise of the show does raise the notion of the apocalyptic fantasy. The cessation of putting up with the bullsh*t of life cannot help but seem kind of worthwhile in the context of still putting up with it.

Read the rest of this uselessness >>
posted at 6:57 AM 1 comment:
Email ThisBlogThis!Share to TwitterShare to FacebookShare to Pinterest
Labels: rumination, seemed like a good idea at the time

This Was Not Written Out Longhand: Thoughts on the end of pen and paper

On a recent Slate Culture Gabfest they touched on the death of composition in longhand, based on Julia Turner's piece about Philip Hensher's book, The Missing Ink), which asked "It's 2012. Do you know what your handwriting looks like?" and ponders whether we've lost something in the era of word processing. The closing line of the article's opening paragraph asks: "When was the last time you used pen and ink for writing, and not just for jotting?"

I do know the last time I wrote something with actual paragraphs with a pen: Monday, June 26, 2006.

Read the rest of this uselessness >>
posted at 7:28 AM No comments:
Email ThisBlogThis!Share to TwitterShare to FacebookShare to Pinterest
Labels: admitting too much, rumination

Google Kinks It Up for Chromebook

I Will Dare's Jodi recently lamented how the Kinks' song "Father Christmas" was used in a commercial for Google's Chromebook (their foray into the world of notebook machines). It's not about the now outdated notion of selling out by the artist, but the egregious misappropriation by the advertising agency that made the ad. The lyrics even in the chorus are not something that could be interpreted as upbeat; it's all about the underprivileged mugging a street corner Santa, telling him to give all his toys "to the little rich boys." Here, listen for yourself:


And now, listen to how that was surgically butchered to hawk the computers:


Read the rest of this uselessness >>
posted at 10:54 PM No comments:
Email ThisBlogThis!Share to TwitterShare to FacebookShare to Pinterest
Labels: holidays, sincerony

It happened first January 1, 2001, then again February 2, 2002, and throughout the first dozen years of this century we have endured something over and over one day each year, and that all comes to an end (until next century) today.

This twelfth day of the twelfth month of the year ending in the number twelve is here and people have their last opportunity in our lifetimes to make a big deal about this repetitive numeric triptych. Get it out of your system, folks, because whether you place any importance on days like 1-1-01, 2-2-02, etc., or not, I think we can all agree: We've had enough.

We need another 88 years for this to have any renewed novelty.

posted at 6:17 AM No comments:
Email ThisBlogThis!Share to TwitterShare to FacebookShare to Pinterest
Labels: only making it worse, ranting

A tale of discovery in the digital age

The late '80s through the mid '90s was the period I'd consider my music heyday, when I was buying CDs by the dozens, reading the magazines, going to concerts and shows, and keeping up with the goings-on of the business more than at any other point in my life. It wasn't an obsession, by any means, but it was where a good portion of my disposable income went at the time. However, we didn't have the internet back then, so finding out things about more obscure bands did take some digging, and in many cases the way I learned a band I liked had a new album was to see it in the bins while at a store. There was no checking Wikipedia for their discography.

Anyway, enough of the you-kids-don't-appreciate-how-good-you-have-it-these-days. I mention all that merely to identify that even as into music as I could claim to be, there was still plenty I didn't know, even about bands I'd discovered and liked, often because the bands I discovered were ones that got played on L.A. radio three times and then disappeared from the local airwaves.

Read the rest of this uselessness >>
posted at 7:38 PM 2 comments:
Email ThisBlogThis!Share to TwitterShare to FacebookShare to Pinterest
Labels: music, real life adventures
Newer Posts Older Posts Home
Subscribe to: Posts (Atom)
"All art is quite useless." - Oscar Wilde. This useless... art (?)... chronicles the musings of me, Doug.