Hey! A picture I took! 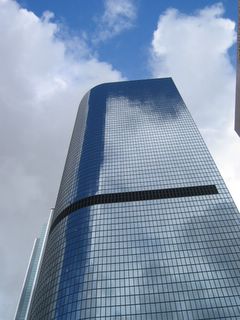 nothing to do with anything. building in downtown L.A.

posted at 10:31 PM No comments:
Email ThisBlogThis!Share to TwitterShare to FacebookShare to Pinterest
Labels: L.A., photos

There was a time when I sent out Dougression-type emails to commemorate the lesser holidays like that. There was a time when I thought I had a reason to, I suppose. I was inspired by some vague pleasure associated with acknowledging the little guy, celebration-wise. It wasn’t so much that I did anything to actually celebrate the days in question; it wasn’t accurate to say I was really “in tune” with the origins of the celebrations (although I could do modest research on the internet to approximate some understanding thereof); it wasn’t as though I gained anything from alerting people to the trivial aspects of the days other than some minor satisfaction from having sent out something.

It was easy fodder for subject matter; that much is easy to admit. Making it interesting for my “audience” was pretty simple, given I wasn’t blathering on about myself. It ensured I’d get at least a few messages read by a fair number of people each year; for some reason that must have appealed to me. Ultimately it all boiled down to: Finding some sense of community in this big crazy world. (It’s only over-analysis of the situation that renders that conclusion, but that’s what I do.) I aspired to keep some modicum of contact with those people who had expressed some interest in hearing from me; there’s only so many folks with whom I can hope to get along well, so I can’t let them get too far away (metaphorically speaking). Sending out messages is, frankly, how I maintain some of my friendships (in some cases it’s the entirety of the relationship), so it’s how I get some sense of connecting with these people without having to make an effort to, say, see them face to face on any sort of regular basis. But I digress. We were discussing the commemoration of events like the quaint notion that a rodent predicting the severity of winter for the next three fortnights.

Why would anything like that catch on? More important, why would it continue to be celebrated in this day and age? It gets back to the community thing. We like excuses to get out from the doldrums of our everyday existence, yes, but we also want to get out amongst others who are of a mind to celebrate something just for the heck of it; it makes us part of a group of ostensibly like‑minded individuals, if only for one day in February. (It’s also probably the only time that town in Pennsylvania gets mentioned in the national news, and must do wonders for its local economy with the temporary boom in tourism, or at least in reporters staying in town to cover the morning’s festivities.) However, my messages commented more on that delightful absurdity than about the importance of whether it would be snowy through March (growing up in Southern California that’s never been of particular concern); it intrigued me that people went to such efforts to maintain a tradition that had long since lost its intended significance. (Well, that presupposes that everyone appreciates the day in some ironic context; it’s entirely possible that Punxsutawney Phil can foretell the weather and it’s unfair to dismiss it as a long-standing publicity stunt. All I can state definitively is my intention with the messages I sent, and only somewhat so at that.) Something about that appealed to me, and I figured it would appeal to others (based on the fact it still gets mentioned on calendars and the news, etc.), and those people are worth keeping in contact with.

Or at least they used to be, before some implicit novelty wore off. Or perhaps I've succumbed to a hibernation-like routine. Every so often I emerge from my hole, see my shadow, and then... six more weeks of curmudgeon-ness.

And pretending that "curmudgeon-ness" is a word is a sure sign I need more human contact. Or maybe I just need to be feted by Pennsylvanians.
posted at 9:23 PM No comments:
Email ThisBlogThis!Share to TwitterShare to FacebookShare to Pinterest
Labels: dougression

Make of this what you will

Poop.
posted at 9:16 PM No comments:
Email ThisBlogThis!Share to TwitterShare to FacebookShare to Pinterest
Labels: pithy
Newer Posts Older Posts Home
Subscribe to: Posts (Atom)
"All art is quite useless." - Oscar Wilde. This useless... art (?)... chronicles the musings of me, Doug.