Last year U2 toured in honor of the 30th anniversary of their album The Joshua Tree.

I remember 1987 (I was just out of high school) and how much songs from that album dominated rock radio back then. It was almost nauseating, and I was someone who liked their music (but wasn't a huge fan).

I also remember what I thought of songs from thirty years earlier (1957) at that time (1987). I'd listened to plenty of the oldies station in my younger days to be familiar with the likes of Jerry Lee Lewis' "Whole Lotta Shakin' Goin' On" or the Everly Brothers' "Wake Up Little Susie" or Sam Cooke's "You Send Me" (I could go on). I liked all that music as well, but being from more than a decade before I was born it did seem... old. Again, it was very good, but... old.

Here's the thing: It is now just a little over the same amount of time passed since 1987 as had passed from 1957 to 1987. However, when I think about the music of 1987 now, it doesn't seem old. Intellectually I grasp that it is, but it doesn't seem old in the way 1957's music seemed in 1987--even though that same oldies station now plays mostly songs from the '80s (and wouldn't consider playing anything from the '50s).

Read the rest of this uselessness >>
posted at 7:19 AM 1 comment:
Email ThisBlogThis!Share to TwitterShare to FacebookShare to Pinterest
Labels: dougression, music, rumination

The other morning our son changed out of the shirt I'd picked out (and dressed him in), taking it off and choosing instead a Dodgers shirt instead. 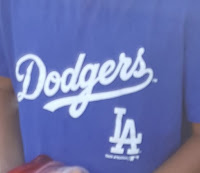 I asked him if he remembered the last time he wore it, and he replied "When we went to the Dodger game." (We took him to his first professional baseball game back on Father's Day.)

I asked him if he remembered who won. He said, "The Dodgers?" (It is unsurprising that he didn't recall the outcome, given it was more about all the stuff he got to eat and chanting "Let's go, Dodgers!" But being only a preschooler the fact he made it through the entire game was remarkable.)

I had to say, "No, it was the Giants." He furrowed his face and said, "I only want the Dodgers to win."

Then Wednesday night when we got home another Dodger game against the Giants was about to start on TV. When he saw the shots of the players on both teams he asked who was the "grey team" (going on the color of the road uniforms). I answered it was the Giants, reminding him it was the team the Dodgers played when we went to the game.

Unprompted, he said, "The Giants are a sack of poop. I want them to lose all the time."

As a parent, I know in general I should dissuade that sort of "sack of poop" sentiment, but in this case I allowed it.

It's also worth noting the Dodgers won that Wednesday game over the Giants in extra innings.


posted at 7:15 AM No comments:
Email ThisBlogThis!Share to TwitterShare to FacebookShare to Pinterest
Labels: parenting, real life adventures, sports
Newer Posts Older Posts Home
Subscribe to: Posts (Atom)
"All art is quite useless." - Oscar Wilde. This useless... art (?)... is the property of Doug.