Someday I will explain to my son that there was a time when the Friday after Thanksgiving was not commonly called "Black Friday." (This will come after explaining the day preceding Black Friday used to be called "Thanksgiving.")

The explanation won't be that people didn't go shopping on that day; it will be that the day simply was "the day after Thanksgiving." Certainly retailers were referring to it as "Black Friday" out of a co-opting of that term from original negative connotations to suggest the accounting association of getting "in the black" (profitable). However, that was essentially industry jargon; one didn't see it used in advertisements. (At least, it's certainly my recollection that ten or fifteen years ago commercials didn't refer to it with such terminology; that may be more a flaw of my memory than actuality.)

Given the way things have progressed I fear by this theoretical time in the future my son will be incredulous there was ever a time when commercials didn't expressly reference the day's events as "Black Friday" sales. As one can see now they do so with the full presumption the public knows what that means (which, it stands to reason, by now they do) and it seems highly unlikely that's going to change between these days when it is ubiquitous and when he is old enough to notice such things.

Here's hoping he won't ask why his father was spending some time putting this on the internet rather than being out shopping with the hordes.

Read the rest of this uselessness >>
posted at 11:25 AM No comments:
Email ThisBlogThis!Share to TwitterShare to FacebookShare to Pinterest
Labels: holidays, parenting, sincerony

After a certain celebrity was ostensibly charged with "breaking the internet" last week I'm reminded of this incident from several months ago...

Back on Father's Day we went to breakfast at our usual spot (because I am a person who prefers familiarity) and although our infant son was in the car seat (in those last weeks before he outgrew it) he wasn't sleeping through things (as he had been doing back then when we went out to eat). But that's not the noteworthy thing here.

Because he was awake we didn't cover the seat with a blanket and thus he was somewhat visible to other patrons. That's not a big deal in general. We'd looked at others' babies over the years so it was only fair that others could take him in.

After we got seated in our booth a woman (not someone we recognized) came over. The canopy of the seat was extended so she asked to see him and so we acquiesced and pulled the canopy back. She remarked on his cuteness and being a handsome boy, and we offered the polite gratitude to the compliments.

Read the rest of this uselessness >>
posted at 9:32 PM No comments:
Email ThisBlogThis!Share to TwitterShare to FacebookShare to Pinterest
Labels: only making it worse, parenting, real life adventures

Good grief: Parts of "It's the Great Pumpkin, Charlie Brown" that will defy explanation

Eventually our son will be old enough for us to show him It's the Great Pumpkin, Charlie Brown (which, of course, will continue air just before Halloween until network TV goes away altogether), and then some years later, given he's my son, it's likely he will start to question certain details. 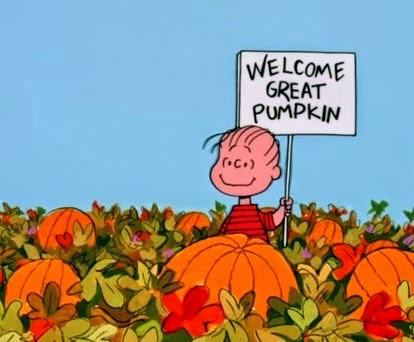 I'm fairly certain it won't be questioning Linus' belief in the eponymous gourd-based character; that is the obvious basis of the entire plot; he'll get that much.

Read the rest of this uselessness >>
posted at 8:07 PM 1 comment:
Email ThisBlogThis!Share to TwitterShare to FacebookShare to Pinterest
Labels: Halloween, parenting, seemed like a good idea at the time, TV
Newer Posts Older Posts Home
Subscribe to: Posts (Atom)
"All art is quite useless." - Oscar Wilde. This useless... art (?)... chronicles the musings of me, Doug.