"Santa Claus is Coming to Town": A shining example of good timing

There are enough Christmas songs (and versions of them) to fill the month leading up to the day. We've heard them every year since our childhood; they've been drilled into our heads to the point where we can sing along with many of them without having to think about what the words are.

It is in that embedded-without-consideration light that "Santa Claus is Coming to Town" remains a holiday staple, because if one pauses to actually give even a rudimentary analysis of the lyrics that eight-decade-old chestnut seems rather inappropriate.

Let's face it: If someone wrote a new song today that featured the couplet "He sees you when you're sleeping / He knows when you're awake" and it was clearly directed at children there would be such an outrage that no radio station or store muzak would dare touch it. But because of the story of jolly ol' Saint Nick delivering toys to the world's children (and coming from an era when there wouldn't be such creepy overtones from such lines) it is considered a classic that is suitable for all.

Read the rest of this uselessness >>
posted at 8:07 AM No comments:
Email ThisBlogThis!Share to TwitterShare to FacebookShare to Pinterest
Labels: holidays, music, seemed like a good idea at the time

A couple weeks ago we took our son to the mall to meet Santa—which is to say, we wanted to have a photo with the man in the red suit and beard for this, his first Christmas where he's not less than a week old. Luckily my wife found one could make a reservation and so we only had to wait around ten minutes.

When we handed him to the assistant (not an elf) to be taken up to Santa and the bench (operating as the sleigh in the pictures) he wasn't upset. When he was set in Santa's lap, he didn't cry (a la Randy's reaction in A Christmas Story); he also didn't smile. His expression was more one of mild confusion. The combined efforts of both of us and the photographer and assistant couldn't bring a smile, and so the "best" photo of the shots taken was not optimal cuteness but at least it didn't have tears streaming down his face.

Could have been far worse.

Of course, with the amount they charged perhaps his expression was incredulity that his parents could consider the venture to be a prudent use of funds. (It's quite a racket...)

Read the rest of this uselessness >>
posted at 9:46 AM No comments:
Email ThisBlogThis!Share to TwitterShare to FacebookShare to Pinterest
Labels: holidays, real life adventures

The time I met Matt Groening

On this, the 25th anniversary of the debut of The Simpsons, I offer this true tale. 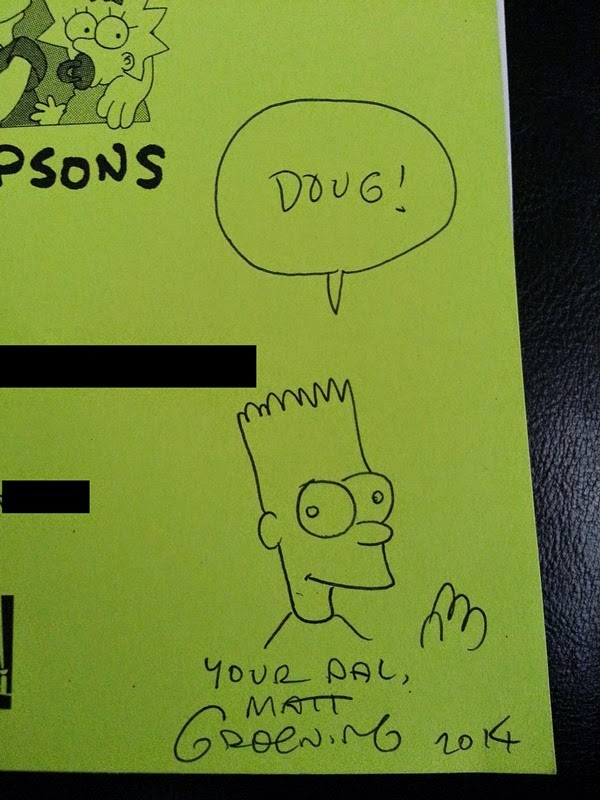 Last month my wife and I got to sit in on the table read for an upcoming episode of The Simpsons. I was sitting literally five feet away from Matt Groening (well, five feet away from the back of his head, but still). On the other side of the table from him was Dan Castellaneta and Yeardley Smith. As a fan of the show from its beginning this was beyond cool.

But first let's back up and talk about how it came about.

Our son ended up in a daycare infant class with another little boy and the two of them became buddies. Through that pairing we met the other boy's parents (with whom we get along well). As it turns out, the boy's father had years ago befriended someone who is now a producer on the show. And last week he contacted us about getting us seats in the room for the table read.

So, having kids is worthwhile after all.

Read the rest of this uselessness >>
posted at 10:33 PM No comments:
Email ThisBlogThis!Share to TwitterShare to FacebookShare to Pinterest
Labels: admitting too much, real life adventures, Simpsons

Recently when I went to lunch (at a restaurant where I dine probably at least once every other week) I walked to the register and ordered my usual. When the cashier noted the amount it seemed a bit less than I expected but I didn't balk at that. I handed her money, got my change back, and then found a table to await my food.

While waiting I looked at my receipt and noticed: She had given me what was noted as the "senior discount" (10% off my pre-tax total). 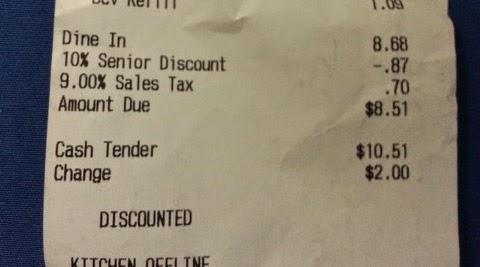 Nonetheless, I thought: Hey, all right--that saved me 87 cents.

Getting old has finally paid off.

posted at 10:15 PM No comments:
Email ThisBlogThis!Share to TwitterShare to FacebookShare to Pinterest
Labels: admitting too much, real life adventures
Newer Posts Older Posts Home
Subscribe to: Posts (Atom)
"All art is quite useless." - Oscar Wilde. This useless... art (?)... chronicles the musings of me, Doug.