Something less than 1000 words, admittedly 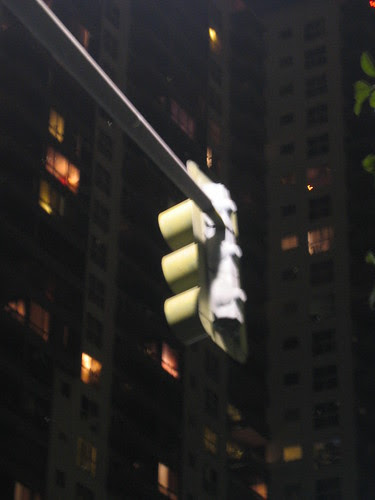 Another picture: A traffic signal in downtown L.A., presented in this larger size to make it seem more dramatic.
(Do I take pictues other places? Sure. Some of them are even in sharper focus. But where's the fun in that?)
Remember: If it's kind of odd in composition, it must be artistic.
posted at 10:22 PM No comments:
Email ThisBlogThis!Share to TwitterShare to FacebookShare to Pinterest
Labels: L.A., photos 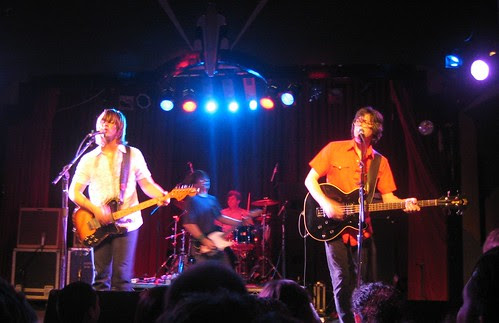 Here's some pictures I took at the Old 97's concert last night. (The ones that aren't in focus merely capture the energy of the moment.) Enjoy.

And to see the rest of the shots, check out this kodakgallery album. (You don't have to sign in; just click the View photos without signing in link.) 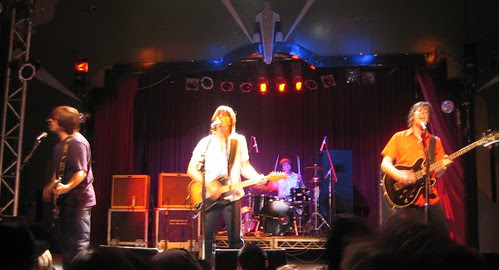 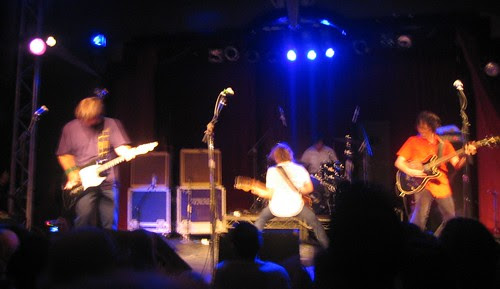 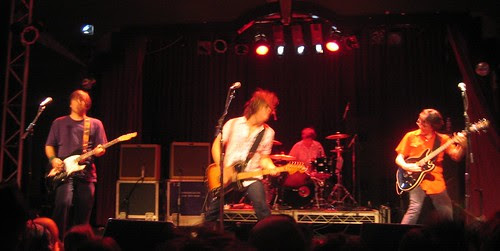 posted at 3:57 PM No comments:
Email ThisBlogThis!Share to TwitterShare to FacebookShare to Pinterest
Labels: music

Having seen the Toyota commercial mentioned last week, and paid more attention to it, I admit: my comments were glib. ("Glib"? On the Internet? Really? I know.) The tag line they throw in at the end talks about just because there's "serious technology" you don't have to take yourself too seriously (or something like that). So it wasn't so much ironic, as kind of tongue-in-cheek. But still, they were trying to make a big deal of having developed windshield wipers that turn themselves on, which, if you think is a good reason to buy a car, you really need to have your license taken away. I'm not sure we should even let you on the bus, frankly.

Eh, on second thought (third thought by now?), soon enough you won't be able to afford to take the car out for it to potentially get wet and employ this feature, so heck, go out and waste your cash while you still can.

Shifting to another commercial: I haven't seen this in a few weeks, so I suspect they've stopped showing it, but Jack Daniel's had a spot that showed a slow montage of still pictures of people at least ostensibly enjoying their product while over it played (again, no joke) "Jane Says" by, of course, Jane's Addiction. I have no difficulty believing Perry and Dave, et al, would sign off on having their song used that way (Dave must have debts from Celebrity Poker or keeping Carmen happy), and I am not surprised that songs from those days when "alternative" music caught on with the mainstream would begin to be used in ads; it's what happens--marketing co-ops pop culture because, well, it works.

Still, despite its popularity with the (now) aging counter-culture, the song is about a drug addict, isn't it? The steel drums sound great, I admit, but I guess I figured someone at JD might have listened to the lyrics and considered the possible less-than-ideal association with their product before they agreed to produce the commercials and run them in prime time. That's not cheap. They certainly wouldn't want people getting the idea that whiskey could be... addictive.

Well, I figure someone must have paid some attention eventually, and the spots have been pulled. Perhaps they're only running late at night when I'm not watching. Or maybe they have lost their target audience, because that audience hawked their TVs to pay off... other debts.

Toyota has a new commercial where they spotlight (I'm not kidding) the one/fifth of a second that one saves without having to turn on the windshield wipers manually, as the car detects rain striking it and turns on the wipers on its own. One/fifth of a second. They show very, very brief glimpses of what one could do with that saved time, pleasant activities flash by in increments I presume last 20% of a second.

All I can wonder is: Are they trying to be ironic in ads now? They play it so straight; it seems like they really wanted to tout the new feature. And I'm not in the advertising game, but I have to think that appealing to the irony-loving demographic is not worth running in a nationwide campaign for a major automobile company.

And these ads wouldn't appeal to mere irony-lovers; these ads would have to appeal to those who are also nihilistically self-absorbed and don't give a crap about the hybrids that Toyota can't build fast enough. Or maybe that's just a demographic that Toyota hopes exists in order to move their other cars.

Or maybe they're hoping that stupid people with lots of money won't pay too much attention. I mean, in my experience it takes several seconds, depending on how heavy the rain is, for there to be enough moisture on the windshield for there to be anything for the wiper to, uh, wipe. Otherwise it just scrapes across the glass, making that screech that makes one wish it were only fingernails on a chalkboard. Thus, I'd wonder how long it takes for the car to stop the wipers on its own (which is not mentioned in the spot).

This is why I take public transportation.
posted at 10:55 PM No comments:
Email ThisBlogThis!Share to TwitterShare to FacebookShare to Pinterest
Labels: rumination, TV

I voted. I got a sticker.

Election day 2005: Although I have been old enough to vote for nearly 20 years, it was only last year I discovered the joy of voting in the morning. Prior to that I would vote in the evening after work, and although that allowed me the fun of picking candidates at random (given that by then the winner was already announced thanks to exit polls), it denied me the true joy of election day: Adulation from other people for no particularly good reason.

In those years, after making some effort to read the propositions and have some idea how I was going to vote on those, then going to the polling place, then patiently waiting for the nice elderly people behind the table to find my name on the list, then waiting for a booth to be available, then going through the ballot and punching the appropriate holes, it seemed like a little oval sticker that read "I Voted" was rather hollow recompense. Heck, some years they would be out of stickers. Sure, voting is a priviledge and all that, but given how low turnout tends to be, it seemed like the government could sweeten the deal just a bit. The sticker didn't even stick that well.

However, I didn't get it then, because after leaving the polling place (and never, ever, being asked how I voted in an exit poll) I took my little sticker (when I got one) and just... went home. As nice as home was, everyone there (if there was anyone there) pretty much expected me to vote. The sticker held no cache with them, because with them the act of voting was not special.

Then starting last year, when I voted in the morning (and hence had to actually vote semi-seriously--click here to see that entry), got my sticker, and wore it around the rest of the day where people (who didn't live with me) could see it. And therein I learned how many people out there--that I passed in the hall, that I saw in the break room, that I ran into as I was walking to lunch--were (let's call 'em) fans of the electoral process. There were several. More than a couple, at least. They said things like "Good for you" while pointing at the sticker. It took me a while to realize what they were referring to; all those years of not having the sticker had set in me an expected pattern--all day I had to fend them off with declarations of my intent to vote when I got home. And even then, I figured they only had interest in me because I was someone who could still vote the way they wanted to help the side they supported. But with the sticker partially adhered to my shirt today, like last November, they offered their vague praise, without the possibility of influencing my already-cast vote. It seemed so pure, so admirable, and (to the extent that politics is capable of this) so innocent, that even I could overlook my cynicism that told me it was most likely that they figured I voted their way.

I always wanted to believe that someday politics would do something for me, and now I know what that is: A few kind words from the people who aren't so jaded about politics. As long as I got the sticker.

I kind of feel sorry for those who voted absentee.
posted at 10:29 PM No comments:
Email ThisBlogThis!Share to TwitterShare to FacebookShare to Pinterest
Labels: politics (sorta)

So this kind of qualifies as getting published

For those of you who wondered why I don't write something for somewhere other than my own web space here (and bless your heart for thinking of me when you weren't contractually obligated to do so), below is a link to the Black Table website, who (inexplicably) put up something I submitted to them:

It's called getting good mileage out of the material, people.
.
posted at 7:44 PM 5 comments:
Email ThisBlogThis!Share to TwitterShare to FacebookShare to Pinterest
Labels: internet
Newer Posts Older Posts Home
Subscribe to: Posts (Atom)
"All art is quite useless." - Oscar Wilde. This useless... art (?)... is the property of Doug.