Who makes it through Watchmen? 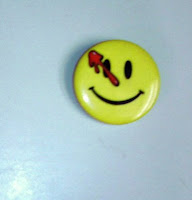 With the legal battle between Fox and Warner Bros. resolved, the Watchmen movie is set to open Friday. A day I doubted would come, and one about which I'm still not 100% sure how I feel.

On my Facebook profile I list Watchmen as one of my favorite books, and I still think of it as a phenomenal literary achievement. Of course, that's all based on having read it back in 1986-87, when it was first published (in serial form of 12 monthly issues), and really being blown away by it. In fact, I even wrote a paper about it for a college literature class (citing also Maus and The Dark KnightReturns).

I have not re-read Watchmen in the two decades between that point and now, but clearly it made a sufficient impression on me back then to linger in my mind as a favorite. Something I specifically remember from back then: how well-suited it was to be brought to the big screen. Of course, it was so layered that I must have subconsciously doubted any film could do it justice.

I was considering re-reading it before seeing the upcoming movie, but I decided against it (and with as busy as I tend to be, I probably wouldn't get that done in time anyway). Somewhere in my brain I know it's better to let the movie stand on its own, and possibly re-read it afterward.

One of the blogs I follow is by a young woman in Minnesota who reads a lot. Recently she posted how she had given up on reading Watchmen. She just couldn't get into it. However, the primary reason she started it was due to the overwhelming critical praise of it; like any book with such rave reviews, she must have felt compelled to give it a look.

But now she says Watchmen can suck it. She's not finishing it.

I left a comment that explained that see the appeal one needed to have read it back in the '80s. And it helped if one had a penis.

I elaborated about how its trenchant deconstruction* of the superhero mythos really required a background in that conventional superhero paradigm. Without having grown up reading superhero comics first—not just seeing superhero movies and TV, but reading the monthly tales in the drawn panels—attempting to read Watchmen would be akin to tackling Rosencrantz and Guildenstern Are Dead before mastering Hamlet.

And having worked in a comic shop for many years back in those days, I know the demographics skewed heavily male. (I won't attempt any generalizations about the violence appealing more to one sex than the other.)

I further posited that its paranoid themes held up better in the time it was first published—back in the era of the Cold War (albeit its last days). The contemporary cultural neurosis about terrorism simply isn't the same as about the previous one about communism.

But ultimately the hype of something has a tendency to grow disproportionately large relative to the the actual quality of the art. To come in with the expectations created by two decades of geek deification is to render the work utterly incapable of succeeding. However, without the hype, the act of attempting to read it wouldn't have occurred.

It does turn into a lose-lose situation. Little lives up to the hype.

So it is those who hyped it who should "suck it."

Of course, they'd undoubtedly just rave about how cool it was to have sucked it.

I say all this based on my recollections of a book from 22 years ago. And while I may or may not be better, I'm not the same person I was 22 years ago, so I doubt it would live up to my own memories were I to re-read it now. Not that it isn't still good, but over all that time its legend in my mind must have expanded.

No point in possibly making my nostalgia suck it.

* A blatant attempt to harness a tiny bit of what I was supposed to have learned in my literary criticism class 15 or so years back.

p.s. Yes, the image accompanying this post (a blood-stained smiley face) is a button that was part of the merchandising back when the book came out. Yes, I have had since then. Not only did I buy buttons, I also bought a set of posters of the covers of the comics, and even a limited-edition leather-bound slipcover version of the graphic novel.

I had it bad.
posted at 10:27 PM
Email ThisBlogThis!Share to TwitterShare to FacebookShare to Pinterest
Labels: movies, pop culture, rumination