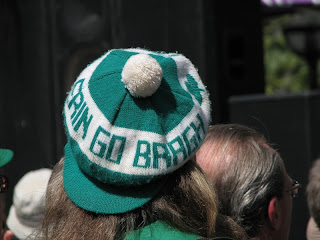 Today at lunch I strolled a few blocks from the office to watch the St. Patrick's Day festivities put on by the city in Pershing Square.

I didn't see the parade that preceded them, but I did get to the park in downtown L.A. in time to see the celebrities they'd lined up to come on stage for about 15 seconds each--5 of which was wishing everyone a "Happy St. Patty's Day" and the other 10 of which was plugging whatever they had to plug (actor--and apparently, grand marshal--Robert Patrick – The Unit on Sundays; local traffic/weather reporter Vera Jiminez – the KCBS early morning news show, 5 – 7 a.m.; four of the Laker Girls – tonight's Lakers game, etc.).

And there was Lorenzo Lamas. Yes, that Lorenzo Lamas (Falcon Crest, Renegade, etc.). I don't recall what he plugged (if he had anything); I was sitting near the back, eating my lunch, and frankly wasn't that interested.

Then they announced that Mr. Lamas would be singing… the National Anthem.

I don't know what I expected from St. Patrick's Day, but had I made a list when I woke up today, I can say this: Hearing Lorenzo Lamas sing the Star-Spangled Banner definitely would not have been on it.

(No, I didn't get any photos of him singing. I was too far away. And frankly, it's just him singing; it's not like he was doing something all that photo-worthy, like getting out of a limo with no undergarments.)

To be fair, he wasn't bad. He stayed more or less on key. He didn't attempt much variation in going up and down, but he didn't butcher the song. And the only lyric I notice that he messed up was in the last lines, where he sang "…does that star-spangled banner yet wave / For the land of the free…" (when the word, of course, is O'er—over with the v dropped; Francis Scott Key must have needed only one syllable rather than two). It could have been much worse.

Of course, one wonders why he'd been who they'd get for an Irish-themed holiday. Perhaps, as a friend of mine quipped later, they thought his name was Lorenz O'Lamas. 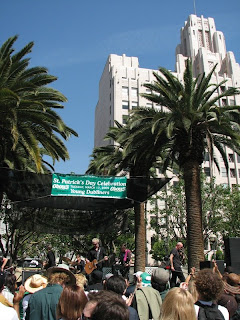 Then the Young Dubliners (a band featuring Irish ex-pats living in Los Angeles) performed as they have at these festivities before (as I mentioned in this post from last year). Not only did they put on an energetic show, but for a free midday concert in the middle of downtown L.A. in the blazing sun, they put on a way better show than they had to.

(I must admit I've never paid to see them perform, but seeing their numerous March 17th performances I have been inspired to get several of their albums of Celtic-influenced rock.)

Lead singer Keith Roberts noted between songs that they'd been up since 5 a.m., as they did an in-studio performance on the morning program for local station KTLA. And later they were booked as the musical act on the Jimmy Kimmel Live show (apparently their first nationally televised late-night performance). And then later they had a gig down in San Diego at the "Shamrocker" Festival.

Apparently, when one is in an Irish-named band in Southern California, one needs to milk St. Patrick's Day for all it's worth.

Especially when one has over ten years of playing clubs and finally snags a spot on one of the late-night shows.

(Photos of the show have been added to the photo site.)
posted at 11:59 PM
Email ThisBlogThis!Share to TwitterShare to FacebookShare to Pinterest
Labels: holidays, music, photos