It is what we need to know

Yesterday morning I was watching some local TV programming as I got ready for work, and the news cut to a story of an auto accident with a tipped vehicle. Their helicopter provided aerial footage of the scene, and as is commonplace with television news, a graphic ran along the lower portion of the screen to explain the visual to viewers with the sound down (which often is the best way to watch such shows, given the vapid words coming out of the mouths of the hosts).

And that graphic featured the text: Car On It's Side. 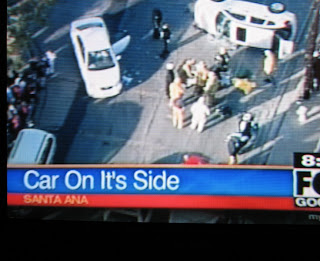 And because I had the camera nearby (being weird that way), I grabbed it and was able to snap the shot above to document it.

At this point, you're probably thinking, Oh great. Doug's harping on a silly grammatical error again (and, admittedly, there would be some basis for thinking that, given all these posts from the past). But even I've lost interest in simply noting instances of this, so I assure you: That's not why I mention it now.

What made this noteworthy was this:
Within a few seconds, the graphic changed to read: Car On Its Side (documented with this follow-up shot below). 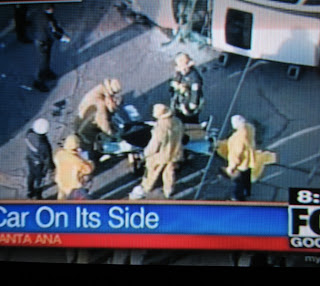 Someone in the news room caught the error and corrected it before the guy in the copter could finish explaining that there were no serious injuries but that traffic was going to be even worse than usual on the affected freeway.

Someone working in the local media demonstrated an understanding of the difference between a contraction and a possessive pronoun, and considered it important enough to make the change to get it right. And that deserves to be applauded, not derided. (Seriously.)

(Someone should do a story about that on the news.)

Maybe there's reason for optimism in this world that has nothing to do with our new president.
posted at 12:03 AM
Email ThisBlogThis!Share to TwitterShare to FacebookShare to Pinterest
Labels: our wacky language, TV