Each year on St. Patrick's Day the L.A. Department of Recreation and Parks sponsors a noon concert in downtown at Pershing Square. Returning this year was Irish ex-pats (and now L.A. natives) the Young Dubliners. I missed most of their performance, mostly because I didn't realize they were playing until I wandered over during my lunch, but I did have my camera and attempted to take some shots of the band.

A group had accumulated in front of the band, but because I have a pretty good zoom I on my camera I didn't need to get too close. First I stood way back and zooming in, but as you can see from the shot below, that wasn't turning out so well. 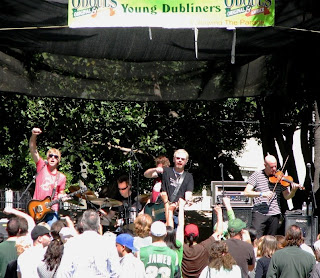 Then I tried to find a closer spot where I could shoot over most of the people without blocking people behind me by standing on a short wall to one side. 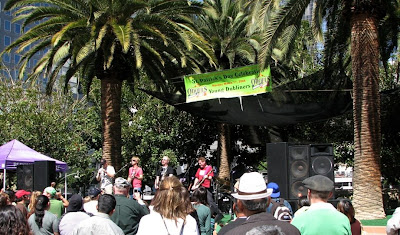 Still not turning out that well, however.
Then I got a bit closer so I could try to get some better detailed shots of the band, but I was still off to the side, out of the way. I aimed the lens at the violinist, closest to me, focused and pressed the shutter. 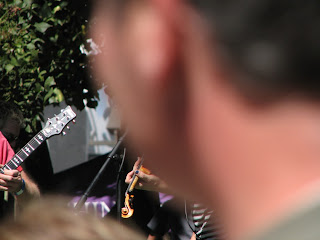 This probably would have been the best shot had Captain Oblivious not stepped in front of the lens at that moment. 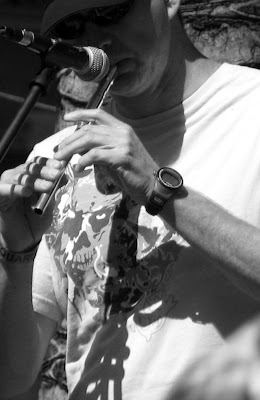 Through some cropping and electronic manipulation the shot on the left is acceptable. (Not great, not necessarily even good, but acceptable.) I like the shadow of his hands on his shirt. So it wasn't a complete loss.


However, to see the shots from Pershing Square that turned out better (because the subject was the fountain rather than the band), check out this posting on the photo site.
posted at 3:41 PM
Email ThisBlogThis!Share to TwitterShare to FacebookShare to Pinterest
Labels: photography, real life adventures