The end of nostalgia, brought to you on-demand

On a pop culture podcast I heard recently they discussed how the availability of "everything" from the past (through DVDs, eBay, YouTube, etc.) makes nostalgia different than it used to be; what promotes nostalgic memories is the selective editing the mind does in its recollections, particularly from those childhood touchstones. The brain remembers the emotional component—the thrill a favorite TV show gave at the time is the source of that nostalgia, not the content of the show itself. And in order for that to develop properly, there had to be that period of a long time away from the show (or whatever it was), where there was no further input or contact with it for the mind to sift out the sour bits (so to speak) so the memory ferments with only the sweet.

One panelist cited the '70s children's show The Electric Company as something he and his brother adored at the time, quoted the bits even as pre-schoolers, and adoring the irreverence in a way they could not have appreciated at the time.

Then when the DVDs came out a few years ago he found that while there was everything he remembered, the parts that he had forgotten was not jewels to rediscover but the cheesy drek that filled the moments between those moments he revered. 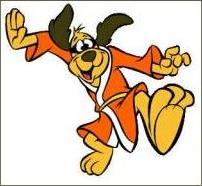 I had a similar experience with a cartoon from my childhood. I remembered holding the '70s Saturday morning staple Hong Kong Phooey in high regard at the time; the slapstick tales of an incompetent martial artist dog who was secretly saved by his sidekick cat each time was something about which a strong nostalgia developed. In the '90s I even bought a t-shirt with the eponymous character on it, which I wore many times (in casual situations—which, for me in the '90s was often).

With the proliferation of channels on cable/satellite TV it's easy to find these old series airing , and on one called Boomerang I came across some episodes of Hong Kong Phooey, and quickly found myself wondering what had appealed to me as a youngster. Even overlooking the insensitive (and potentially racist) aspects of the character, the stories were lackluster at best; there have been clever kids' shows but this was not even close to one. Sure, my standards for plots sere different in those early years, but they weren't that low, were they?

Will children of this era on-demand availability lose that option to have childhood joys gel into nostalgia which will be shattered when they get to adulthood? I think not; although they can access it at any time, they won't. There'll be too much new stuff to occupy their active attention as they move into their teen years (and necessarily rebuke their childhood fancies for a while), because if the rate of distraction continues at its present exponential rate future generations will not have time to keep watching the same show online over and over even if they have the opportunity to do so.

Thus, due to that stretch of years where those things that interested them so deeply in their adolescence (and earlier) will be essentially put away for years (which they will impose on themselves, albeit unintentionally, rather than having it taken away by outside circumstances like my generation experienced) they will have time to develop that same sense of nostalgia that generations of adults have been afforded since the advent of pop culture (in the context we're discussing here).

Hong Kong Phooey image is, of course, copyright Hanna-Barbera.
posted at 11:06 PM
Email ThisBlogThis!Share to TwitterShare to FacebookShare to Pinterest
Labels: pop culture, seemed like a good idea at the time, TV