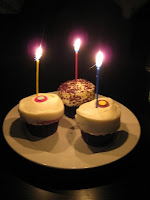 This is the thousandth post here on the blahg (and after only six and a half years), and thus I am faced with the challenge of deciding what to do about that.

On the surface, it seems noteworthy because one-thousand seems like a number worthy of commemoration, but other than being the point where whole numbers change from three digits to four what is particularly special about it? Ultimately that aspect holds no intrinsic value save what we have been convinced to imbue upon it. If one is impressed, is not nine-hundred ninety-nine not also pretty darned impressive? (If someone handed you a check for $999 would you rip it up because it wasn't $1000?)

I'd thought of making a big deal out of the post where the number corresponded with the highest prime number that's still under one-thousand (nine-hundred ninety-seven), but I didn't remember to pay attention and the opportunity to do so obviously has now passed. Not that a prime number is any less arbitrary, but it would have appealed to any nascent math nerd fan base I may inadvertently be developing for the site.

Nonetheless, I have devoted sufficient attention at this point to realize that #1000 is here, stepping into the batter's box (so to speak), and thus if I find myself inclined to make a big deal of it, I need to make that decision. Even as dismissive as I was above about it holding significance, as evidenced by the fact that I'm writing about it now there's no denying that I've been brainwashed convinced of it being potentially noteworthy. The proverbial cow has escaped the barn; closing the door is pointless.

So the question transforms to an exploration of my personality, of whether I'm the sort to toot my own horn or not. However, it's not like anyone else would even be in a position to toot it for me (and, to be fair, the entire blogosphere could be described as the realm of tooting one's own horn, so it's hardly out of character given the circumstances). Will it seem like fishing for congratulations (and, by virtue of mentioning any such event, is that not at least part of why any accumulated amount is noted)? I don't consider myself a pat-myself-on-the-back kind of guy, but after all the hours and hours devoted to this, is a little back-patting completely unwarranted? Heck, is it not amazing that I have not given up? Is the inexplicable tenacity I've demonstrated worthy of commemorating, or is that a cause for condemnation?

I can't make up my mind. But one thing is certain: I'd better stop this or I'll talk myself out of wanting to compose post number 1001 (and make it unlikely that anyone would want to come back to read it).

I will take this opportunity to express my sincere gratitude to every person (and a few automated scripts) who has ever spent a little useless time here.
posted at 11:16 PM
Email ThisBlogThis!Share to TwitterShare to FacebookShare to Pinterest
Labels: meta (a.k.a. talking about the site), tongue-meet-cheek