Signs of nature in L.A.

In recent weeks the wildflowers have been blooming, and living in the metropolitan area crafted out of the desert that is Southern California, one would think that one would have to travel well away from the strip malls and condo complexes to see them. However, on my daily ride on the train I have found evidence of the natural blooms amid the manicured terrain. (The photos were taken out the window while the train was moving quickly, but you should get the idea.) 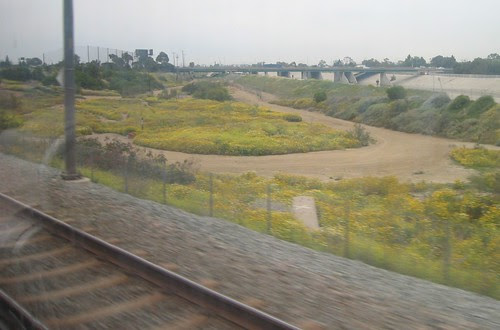 Yellow blooms in an empty triangular-shaped lot in northern Long Beach, just north of the 405 (the bridge in the background is the transition ramp to the 710 north), along the Los Angeles River (yes, the concrete-lined area over which said bridge passes). 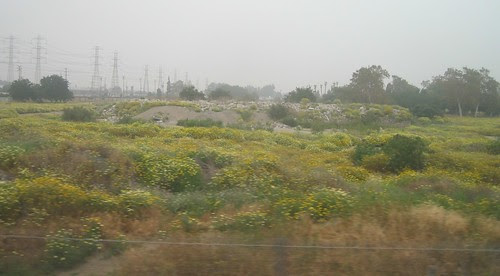 Farther up the Blue Line tracks, just past where they cross underneath the 91 freeway and on the north side of Crystal Park Casino (in what is technically Compton), this vacant field is also awash in yellow. (Yes, admire the power line towers in the background.)

In mere weeks, these blooms will wither and the green will start to turn brown, and the ride to work will offer nothing colorful except the graffiti on the backs of warehouses in Lynwood.
posted at 11:24 PM
Email ThisBlogThis!Share to TwitterShare to FacebookShare to Pinterest
Labels: nature, photos, trains