Square math and the middle-aged mind

[Continuing my theme of revealing things to undermine what little confidence the world has in me...]

The other day my second grade son was watching a cartoon about blocks that do math. It was on Netflix I think; he has mastered all the streaming apps on the TV, and when he has free-viewing time (when Mommy and Daddy need a break) he is more than capable of selecting a show to watch, so I was not paying much attention to how we go there. [Wow, I'm really knocking it out of the park with this introductory paragraph! How can the reader not want to see where this is going?] In this instance, it was something that seemed more toward teaching pre-schoolers or kindergarteners about math--well below where he is in school, but maybe he gets nostalgic for that period of his life; it was at least educational, and certainly far less bad than a lot of shows he could have selected.

As I noted, I was only vaguely paying attention and likely because of that seeing the blocks make square shapes made me think about squaring numbers--1x1, 2x2, 3x3, etc.--and remembered that a number squared is the only way when represented with blocks that it creates a literal square; the units on the vertical axis and horizontal axis obviously must be the same or it's merely a rectangle. [Finally got to the topic, proving that first paragraph was a digression before I even started. Readers love that.]

Squaring numbers is a concept still a few years in the future for my son, but obviously way from way back in elementary school (probably) for me. Still, I hadn't thought of it in such rudimentary terms since... well, probably since I was in elementary school over four decades ago. [Yowza! I am old.]

I then paused and thought about the results of those squared numbers:

Each previous squared result plus the next highest odd number gives the next squared number in the sequence.

[Yes, another diagram! Because my description certainly is not clear!]

The better way to put this for an equation (which I found online, and you should go read that instead) is to think in terms of taking the higher squared result number and subtract the lower squared result from it, which gives the odd number... which is the square root of each added together.

Again, back to the literal square blocks: If you had a 9x9 square and you removed 8x8 of those that you'd have a row of 9 left and a column of 8 left (not including that top corner square already part of the aforementioned row). 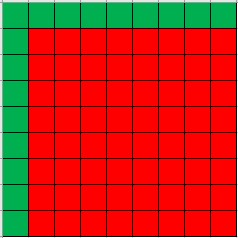 Similarly, back to my quasi-formula: If you had an 8x8 square and needed to make a 9x9 square, you'd need to add a row of 8 on the side and a column of 8 on top and then one more for the corner for a total of 17 more.

Again: Not something that is remotely impressive for a middle-aged college graduate to be thinking. [Oh yeah, we see that.] Heck, it wouldn't be that impressive for an actual fifth grader who was actively learning about it. [Leave the kids out of this.]

But let me make it worse by noting this about my math classes back in high school: I didn't quite get to Calculus but I did get to the class just below it (Elementary Functions, as I recall). I was not great and only passed because the curve was so low that 55% was a C, but I did get there. My point: I had moved way past this level of equations in my academic career, all those years ago, and thought of math in more abstract ways.

And then never really used it (as I went on to be an English major [not that the way this post is going suggests I was a good one]), and my brain largely dispensed with advanced mathematics [to the extent it was ever really in there] because it can only hold on to so much.

But then that other day that cartoon (again, that is really well below even my son's level) prompted me to think about math again [kind of a stretch to say that was "math"], in this way that was neither efficient nor thorough when it came to what squaring a number is, but in that moment I found it genuinely (albeit modestly) interesting. [Not in a way that any other human would or should.]

The only reason I can imagine I found that to be interesting [again, being pretty liberal with that term] was that I don't tend to make time to simply ponder something anymore, with the demands of being a full-fledged grown-up with a family and a job. My mind wandered away from a screen (even though it was still on in the room where I was sitting) and out of everything I could have been inspired to think about in that moment, this was where my mind went. It wasn't impressive, but at least it was still capable of going somewhere, and I guess I was a tiny bit happy it still can.

[That I then spent some time composing this post to talk about this suggests that my mind should not be allowed to wander mildly anymore. Lock it up or give it a shove.]

posted at 10:09 PM
Email ThisBlogThis!Share to TwitterShare to FacebookShare to Pinterest
Labels: admitting too much, seemed like a good idea at the time