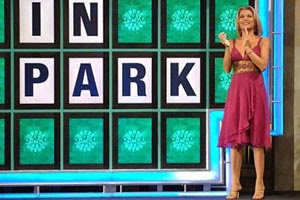 I'm not one who would consider himself a fan of Wheel of Fortune, but I have seen the show on and off since I was a child; these days I tend to see because it comes on after Jeopardy (when I see that) and it's perfectly acceptable to leave the TV on that channel as background while washing dishes or some such activity where I'm not actively paying that much attention. Its longevity undoubtedly stems from that passive involvement capacity (and the fact it doesn't involve the same level of actual knowledge as the show preceding it in syndication); you can watch it without the sound and still be able to play along.

Over my decades of experience with the show I've seen it transform from when the dollar amounts on the wheel were much lower, where the contestants had to "spend" their winnings from the round on a bunch of cheesy prizes, and where the tiles on the board were triangular and needed to be spun by Vanna. But while much has advanced—the dollar amounts have increased significantly, the contestants win the cash or trips or cars, and the tiles have gone to digital screens mimicking the old look—there is one part of the show that has not progressed as one might expect: Vanna is still by the board.

So let's acknowledge one thing:

If Wheel of Fortune were created as a new game show today, with the same technological capabilities that the existing show demonstrates (where the "tiles" can light up and display any letter, rather than need to be turned as was the case in earlier decades), it seems there would be no need for Vanna White. That's not a knock on her; it's merely the truth.

Read the rest of this uselessness >>
posted at 10:53 PM No comments:
Email ThisBlogThis!Share to TwitterShare to FacebookShare to Pinterest
Labels: rumination, seemed like a good idea at the time, TV

Attention shoppers: It's the Ramones

I understand that everything three decades old or older is considered pretty anodyne from a cultural standpoint, regardless of how controversial it may have seemed in its heyday.

Still, to hear (as I did on a recent evening) the Ramones' "I Wanna Be Sedated" playing in a Vons grocery store seems like something that should hold at least a tinge of being a tiny bit taboo.


There are other Ramones' songs where the lyrics are such that your grandmother wouldn't balk while shopping ("I Wanna Be Your Boyfriend"—another of their "I Wanna…" tracks), but "Sedated" is not sedate enough to be acceptable for all contexts.

I'm not suggesting that most people are actually paying any sort of attention to the music playing over the public address while shopping; it's merely filling in the background sound so it isn't eerily quiet. I get that. I'm among the tiny minority who notices such things at all. I know.

Read the rest of this uselessness >>
posted at 10:08 PM No comments:
Email ThisBlogThis!Share to TwitterShare to FacebookShare to Pinterest
Labels: music, only making it worse, parenting
Newer Posts Older Posts Home
Subscribe to: Posts (Atom)
"All art is quite useless." - Oscar Wilde. This useless... art (?)... is the property of Doug.